From Daytona posted on Instagram by carlos_nation18. Looks like it's the same as last years scheme. The scheme that ran what twice. During the chase. But not the 75th Anniversary.
M

If it's not broke, don't fix it. Though they did flip the blue and red M&Ms from last year so 'least it's different that way. Wish we had a side view to see what characters made the scheme this year.

I've always loved this style scheme from M&M's, needs an M&M on the roof though.
M JGR will "officially" unveil the car on Thursday.

Here is the #18 M&M's hauler getting wrapped for the upcoming season (NOTE - skip to 6:20 in the video to see the full design layout for the hauler, which shows off all of the M&M's characters being used): 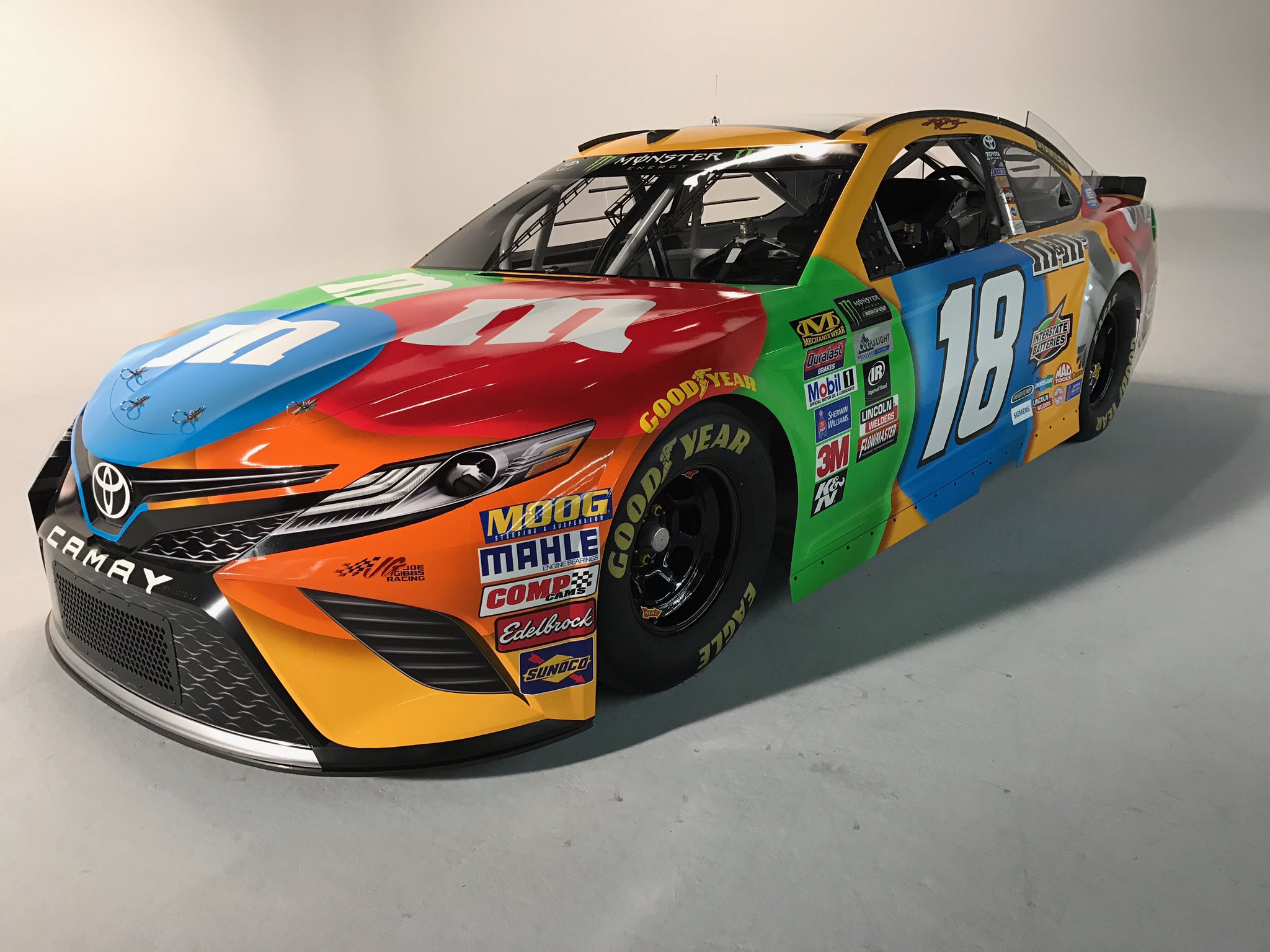 That really is a beautiful scheme.

That Toyota body looks outstanding! Ever since 2015 I've loved how the Toyotas have looked.

The Toyota body actually looked pretty good with the schemes all Toyota teams have released so far...

Well the front might take a bit of while to adjust and the front of the '15-16 Camry still looked nicer than the '17, but hey the schemes looked very nice for 2017 at least

Hated the new Toyota when they first unveiled it, but every paint scheme I've seen on it has looked absolutely gorgeous

I'm still annoyed that there's no M&M behind the roof number. Literally my only complaint about this scheme.
M Where is that? I wanna go meet him here! Tell him to come to my house and sign all my diecast.

Well Kroger is on the back of the car under Camry on the rear panel... I am watching the car for Daytona being wrapped live now on Facebook at JGR and Toyota Racing.... Looks great.

Looks like there will be a M&M's Caramel scheme coming later this season. Credit to Jayski:

Mars this year is rolling out what likely is its largest launch ever for a new kind of M&M's with M&M's Caramel, and the company will support the roll-out with a major push in NASCAR. M&M's will start selling the Caramel product in May. Part of that will be in NASCAR, where the M&M's Caramel brand will run as the primary paint scheme of Kyle Busch's #18 Joe Gibbs Racing Toyota for a third of the season's 36 races. Due to the spring release of the candy, M&M's will hold off on running its first Caramel paint scheme until the Monster Energy NASCAR Cup Series All-Star Race in Charlotte. M&M's will support the launch with TV, digital, social and in-store activation, as well as shoot a digital content series with Busch about "unsquaring" caramel. M&M's is looking at having at-track activation on midway fanzones, and will have a non-Caramel display to start the season at the Daytona 500. The other brands Mars will run paint schemes around this year are original M&M's, Skittles, Pedigree Dog Food and Banfield Pet Hospital, plus special red, white and blue and Halloween paint schemes around the Fourth of July and Halloween, respectively. Mars, which sponsors around 30 races a year with JGR in a deal worth eight figures annually and has been involved in NASCAR for more than 25 years, renewed its official deal with the sanctioning body last year through 2019.
Click to expand...