sadlerfan21 said:
INB4 people with question mark avatars and 2 messages ask where the download link is.
Click to expand...

Battled with the #55 car for about 20 laps at the Atlanta Thunder (infield) track. Really, really fun racing. Lost it by a nose. Dirt trackin' it with @games123

4th 10 winners challenge from 2016 Chicagoland is up. Thanks again to all the great painters who take their time to paint a car for one specific race. Your da real MVP.

First simulation of the 2017 season is nearly complete! Here are some shots of recent activity.

The snarling pack at Talladega, this race was decided by when pit stops occurred, and Henry Baines in the #54 led the way to the checkered as he won his first race of the year with his new team.

We went in to Loudon for the 18th race of the year, and Kevin Gimball in the #19 car sat on the pole and led the most laps. But when green flag pit stops hit, Gus St. Pierre in the #61 took the lead. A caution with less than 10 to go set up a restart with 5 laps remaining. Since it was under 10 laps, Gimball restarted 2nd, but 4th in line. He had to maneuver around 2 lap cars in only 5 laps. The driver of the #19 proved that it would be no issue. He got around them in one lap, and began to chase down the #61. With one to go Gimball got a big run off of turn 2, he was able to stick his nose under the SteelSeries Toyota and they floored it to the finish line, resulting in the closes recorded finish in series history!

We fast forward to Michigan, race #28 on the schedule. The points battle is pretty tight as we come to the conclusion of the season. Blake Barnes in the #66 Toyota leads the points lead but not by much over the #32 of Mark Travis. Barnes, in his first season at Revved Up Racing has 3 wins and 18 top 10s. He would continue his great year at Michigan, leading the most laps, but unfortunately finishing 2nd. The same thing happened the next week at Nashville, where he came up just short after dominating the race. He still leads the points though heading into Dover.

Mat Rodgers goes for a spin after contact with the #17 and #22, sending him hard into the outside wall, only to collect the #62 after spinning down the track.

Close quarters racing for our top 5 after the restart. The #66 of Blake Barnes and the #47 of Rachel Paisley have both been absolutely excellent this year, together leading 1/6 of the laps and combining for 5 wins so far. The two have announced that they are a couple, after they were seen leaving the race track together after Michigan. (I dunno, I'm bored, might as well make a love story like Ricky and Danica haha)

Two in a row in the USORL ARCA Online Series. Horrible car, still wound up with another trophy for the boys back in Winston-Salem.

Redemption from the controversial Talladega, no caution call last night in the Cup race.

A lot of these are placeholders and a few I've just mocked up with the Monster decals from 2016, but thanks to Blu, Dyers and a few others - we have a lot of great cars to start plugging in for Daytona! 20 Days to go, woo! 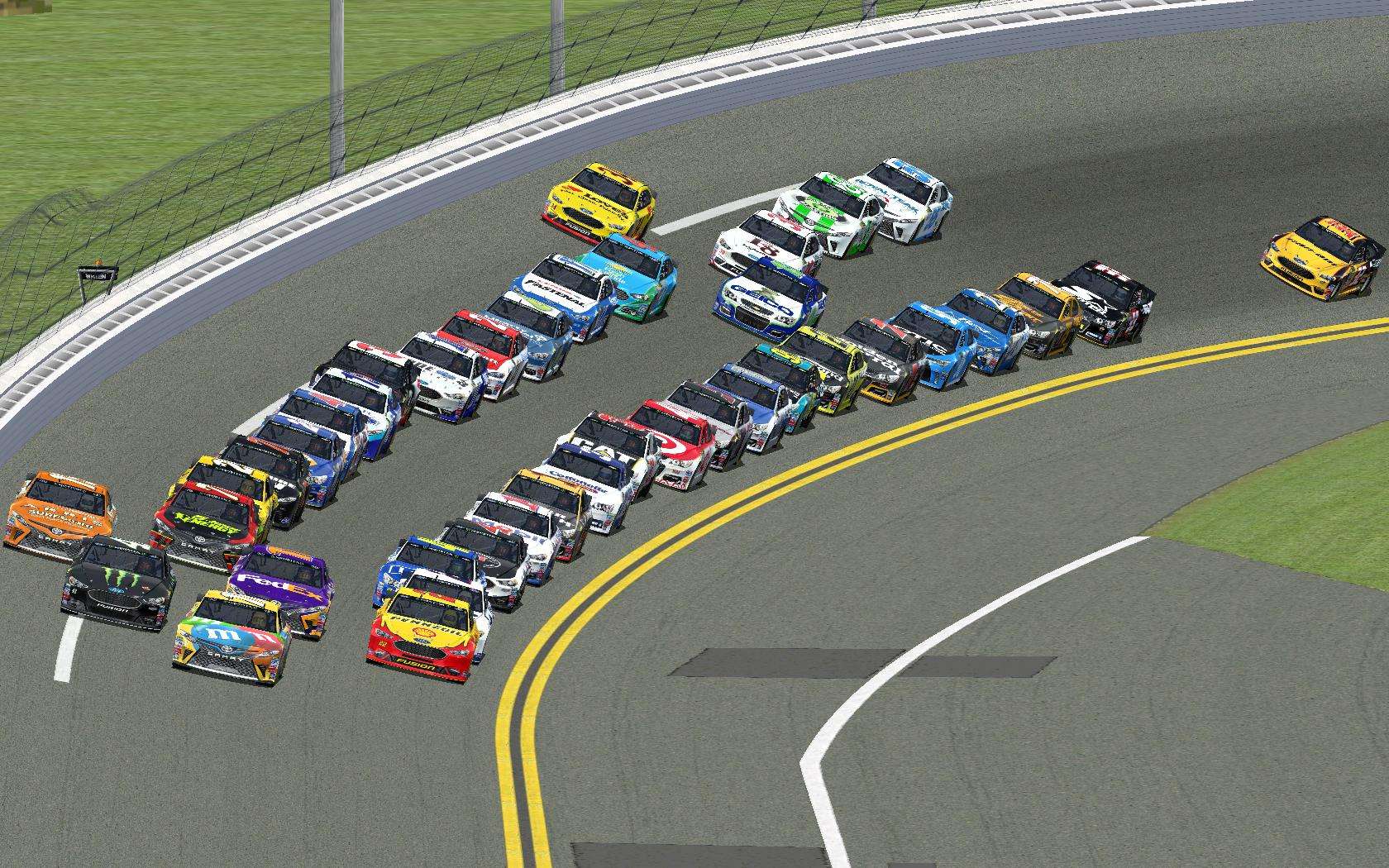 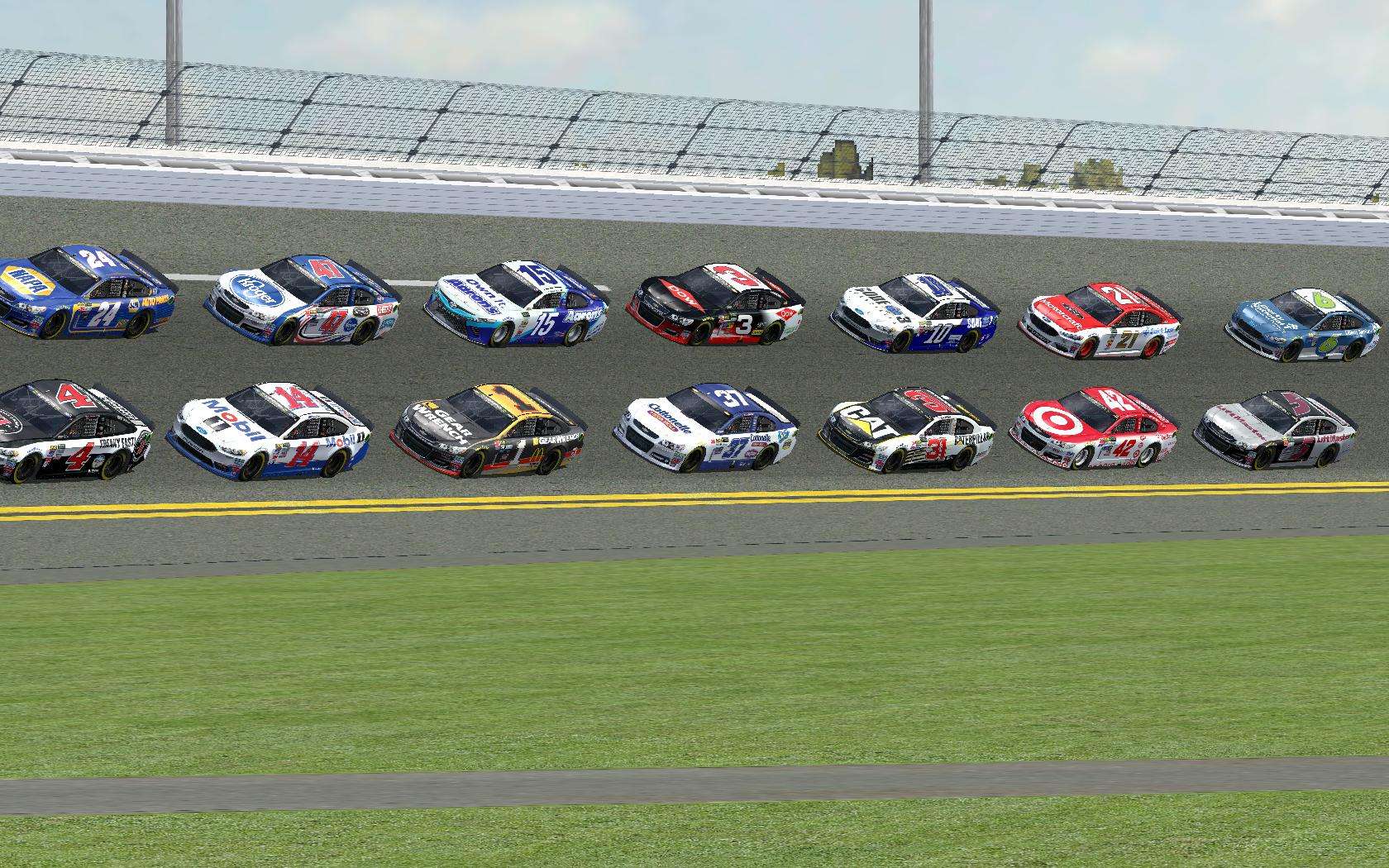 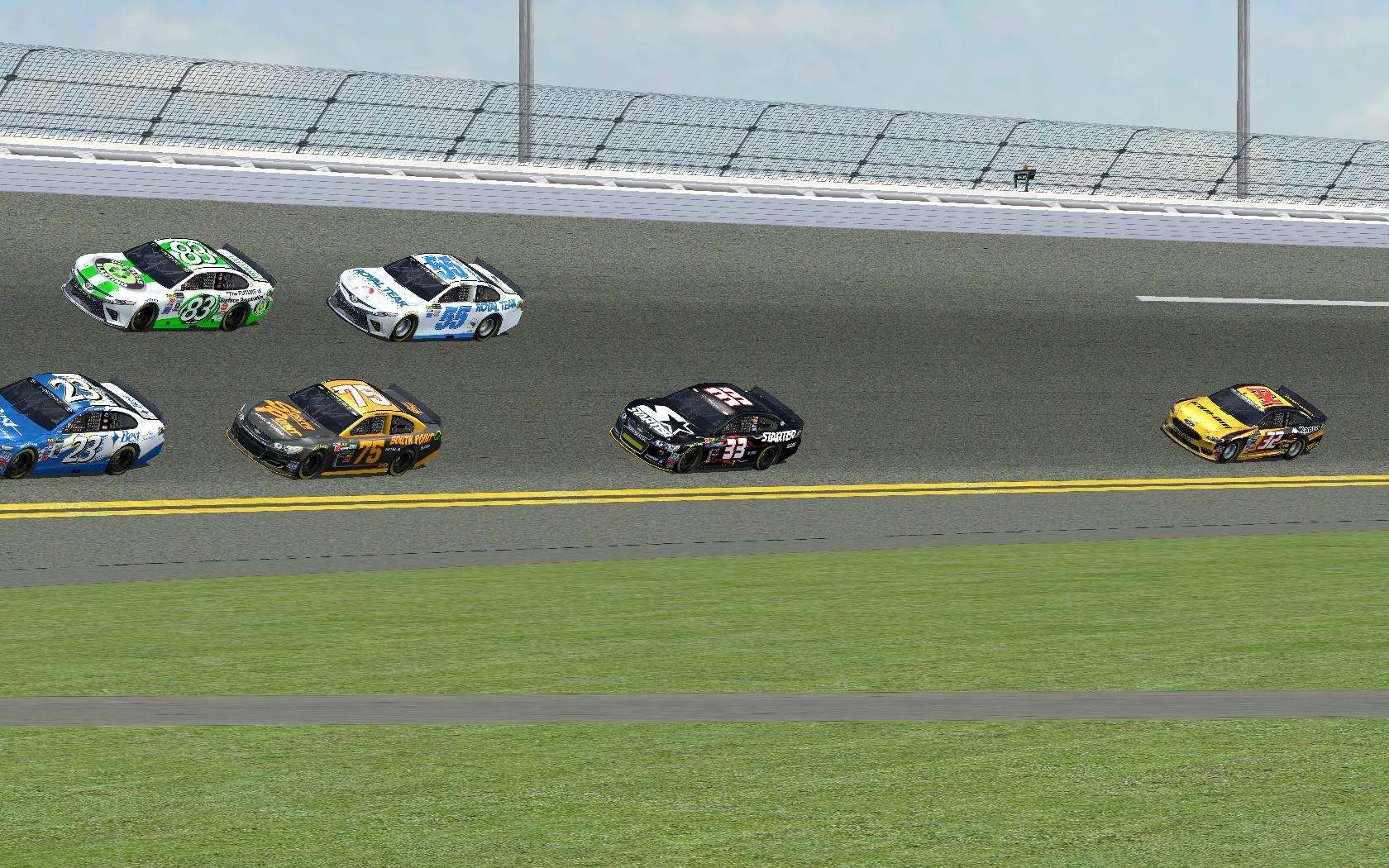 The Nascar Sprint Cup Series roars into Homestead for the final race of the season. The #66 of Blake Barnes held the points lead, but the #80 of Ryan Young was making a late season charge, as he moved within striking distance as the teams traveled back to Florida. Young has won a whopping 8 races this season, and despite some bad luck he is still in the hunt. The #47 of Rachel Paisley wasn't mathematically eliminated, but she would need some great fortune to get the title.

The race started out with the #47 on pole, a fantastic start for our 19 year old rookie. Blake Barnes started right behind her in 3rd, and Ryan Young started in 18th. As the green flag flew, the #47 and #66 proved that they were going to be tough to beat. Together they led 41 of the 70 laps in our finale. The couple were fast and clean throughout the whole race. Pit stops happened on lap 28, and they came out 1-2, as expected. Ryan Young, meanwhile, had a very poor pitstop. The crew got hung up on the left rear and he dropped back outside the top 30. If he was gonna make something happen, he would have to rely on some luck.

Our first and only caution came out with 20 to go. In a battle for 18th, Gus St. Pierre came out of turn 4 three wide, the cars around him went by and the #23 of Max Reinholm had a huge run heading into turn 1. Both drivers misjudged their corner entry and it ended in disaster for both drivers. Reinholm hooked the #61 car and both went into the wall at almost 170mph. Fortunately, they walked away from it, but sharing their disdain with one another outside the infield care center. A shoving match ensued but after the race finished our reporter Jennifer Smith caught up with the driver of the #61 car. "It's frustrating...and I really wish it hadn't happened, but that's racing. I saw the replay, and although he did hook me, I could have given him some more room...I dunno. Last race of the year, and we had a wicked fast car. Started in 39th but were running top 20 there, it just sucks. But I'm thankful we were both able to walk away...after possibly the biggest hit I've ever taken. Max and I talked just a minute ago, and we've come to an understanding it was more of a racing incident. We'll come back and get them at Daytona."

During the caution the field stayed out, and on the restart the #66 and #47 were back to work. Leading the field to green with the #44, #43, and #77 hot on their tails. With ten to go, the leaders caught some lap traffic, allowing the #32 of Mark Travis to get out front and lead. Barnes dropped to 6th and Paisley fell back to 7th, where she would wind up finishing. The #43 of Jeff Pollard was riding in second, and after he got around the lap cars he began to chase down the #32 of Travis. Barnes, meanwhile, worked his way up to third, and was coming fast on our leaders. With 5 to go, Travis got a little bit loose, and it allowed both the #43 and #66 to get in front. With 3 laps remaining, Barnes made a move on the Certainteed Ford of Pollard. They raced hard down the backstretch but Barnes was able to get by. The 23 year old Atlanta driver flew to the finish line, capturing the win, and the championship.

Our reporter Jennifer Smith caught up with Blake as he jumped out of the car in victory lane. After crowd surfing on his crew he spoke to Smith. "I'm speechless....that's...this is just too much. I can't believe it...I...wow. These guys...I tell you these guys are absolute beasts, they make the absolute best cars I could ever imagine driving and I can't thank them enough. I can't thank John and Linda Revinsky enough either...last year I was with another team...and we just weren't where we needed to be. I was doing all I could...but there was only so much I could do. I didn't even score a top 10 last year...and to get this opportunity to drive for Revved Up and Toyota...and win it all, I don't know what else to say. I'm so grateful, it's unbelievable. Completely unbelievable. I gotta thank Cook Out, Toyota, Speedway, Axe, Carfax, just...everybody who made this possible. I can't believe it."

Ryan Young in the #80 finished the season in second, with 8 wins, 20 top 5s, 22 top 10s, and 5 poles. For a 20 year old with limited experience, he's proving year after year that he will be a force to be reckoned with for a long time.

Rachel Paisley finished 3rd in the standings, which is fantastic for a rookie. With 4 wins, 13 top 5s, and 22 top 10s, she was all about consistency this year, and it almost worked out perfectly for the 19 year old.

This is only the first simulation of the year, I'm probably gonna do a lot more, but it was fun to watch for sure.

I can't lie I was rooting for him, for some reason he's been one of my favorites since I started this set, but I never expected him to win the whole thing, I didn't think I made his ratings that good haha. Plus I had Cookout last week and it was so good, it's a travesty I don't have one where I'm living haha

Taking on a new look this year for the DMR NXS Mod. I even renumbered my Xfinity Car for this scheme.
Anyone who knows their Nintendo consoles will know what my car number references.

Its that time of the year again. You know what I mean .. if you don't then well: Mystical said:
Its that time of the year again. You know what I mean .. if you don't then well:

The hype is real

It's been a while since I posted anything regarding my Michigan International Speedway Revamp (I'll call it something else since Revamped and Reloaded already exists ). I would have released the track already, but I've been trying to get turns 3/4 just right. I think it's close enough right now, but you can be the judge!

Anyways, since this is the screenshot and video thread, here are some laps at the track:

Here's a link to the youtube doubler site so you can compare onboard from Joey Logano in 2016 to the track that I've created (It's a legit web site and you will not get a virus): http://www.youtubedoubler.com/?vide...?v=xLhtOsxMqQE&start2=39&authorName=BattMaker

The grip levels are good for the lap times as of last year, so I plan on reducing the grip to slow the cars down around 1.4 seconds for the final 2003 version. Additionally, I need to create the .lp files for the AI (which this will be first time doing so. If anyone wants to PM me some helpful hints feel free ). I also plan on releasing a 2016 version with SAFER barriers (don't worry I will use my own) and an IROC version with the restrictor plates. The 2003 version will have multiple grooves where the 2016 and IROC version will not.

Me edging @DanAsher26 at Talladega Night

Nah this was better.