Thirty-two members of the Sim Racing Design community submitted picks for the events at Kansas Speedway this past weekend. Scoring was very high this week, with the top 10 finishers all earning over 200 points! All pick-submitting members also managed to score well over 100 points as well! We also have a tie in our top 5 once again this week - this time, it's for second place! But before we get too far ahead of ourselves, let's take a look at our "Final Five" who battled it out for the win (in A-Z order):

While some very awesome picks were submitted for the events out in Kansas, still we can only crown one winner... So, without further delay, please join me in congratulating @Keselowski2Wallace on taking home his second win of the season! K2W takes the win with a score of 257 points! Now for our tie... Finishing in a tie for the second position are @4WideRacing and @Harry Nurpplez, who each ended up with scores of 227 points! Fourth place belongs to SRD Pick'em Series Sunoco Rookie contender, @NascarRyan24, who racked up 217 points this past weekend! And our final top 5 spot goes to @db512, who finished with a score of 211 points! 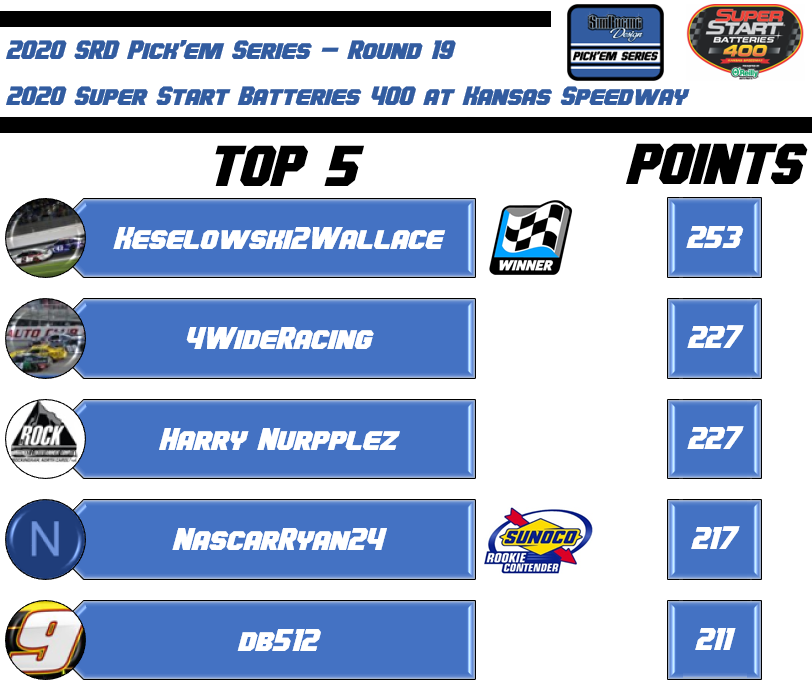 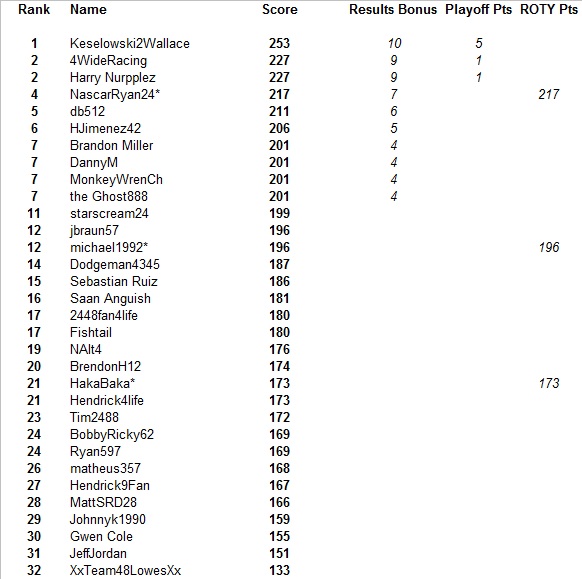 As mentioned above, @Keselowski2Wallace picked up his second win of the season, joining @BrendonH12 and @Ryan597 as the only two-time winners of the 2020 SRD Pick'em Series Season! They, along with @Brandon Miller, SRD Pick'em Series Rookie @timoteo328, @MonkeyWrenCh, @MattSRD28, @db512, @Gwen Cole, @jbraun57, @4WideRacing, @Hendrick9Fan, @2448fan4life, @NAlt4, @Johnnyk1990, and @Hendrick4life are the only members who have managed to find victory lane this season. These 16 members also currently make up our 2020 Playoff field. But even though all of the Playoff spots have already been laid claim to, YOU still have time to grab a win and steal a Playoff spot from another member! So just continue submitting your very best picks, and who knows? You might just pick up a win and claim yourself Playoff spot to go right along with it! 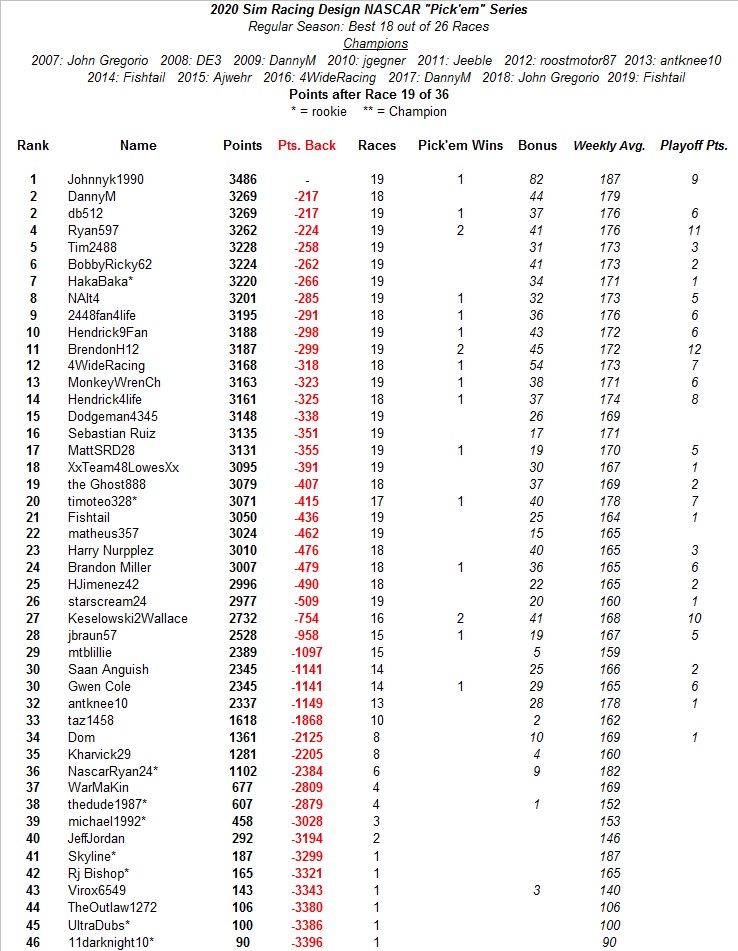 Beginning this week, we will also be reviewing a new section here in our race recaps: the Lowest Scores...

I'll let Matt himself explain a little bit about how this works before posting specific scores:


MattSRD28 said:
Lowest score dropping has begun! Now, anyone with 18 or 19 starts are on even keel. It happens every year and IMO it's one of the best parts of how this game is run. A player's total score is made up of the best 18 races out of 26. Someone could have missed as many as 8 races, easy to do this year with all the mid-week races, and have not missed anything by the end of the regular season and can make the Playoff! So, it's a wide-open field for those remaining 13 Playoff grid spots.
Click to expand...

Now, let's take a look at some of those lowest scores:

And finally, let's take a look at our Sunoco Rookie of the Year Battle! @HakaBaka retains his spot atop the rookie standings for another week! His lead over rookie rival @timoteo328 has also grown, due to the latter missing this week's events. @NascarRyan24 takes home the title of top-finishing rookie at Kansas with a nice top 5 in fourth place, and @michael1992 continues to gain ground on the inactive @sweetracerdude. 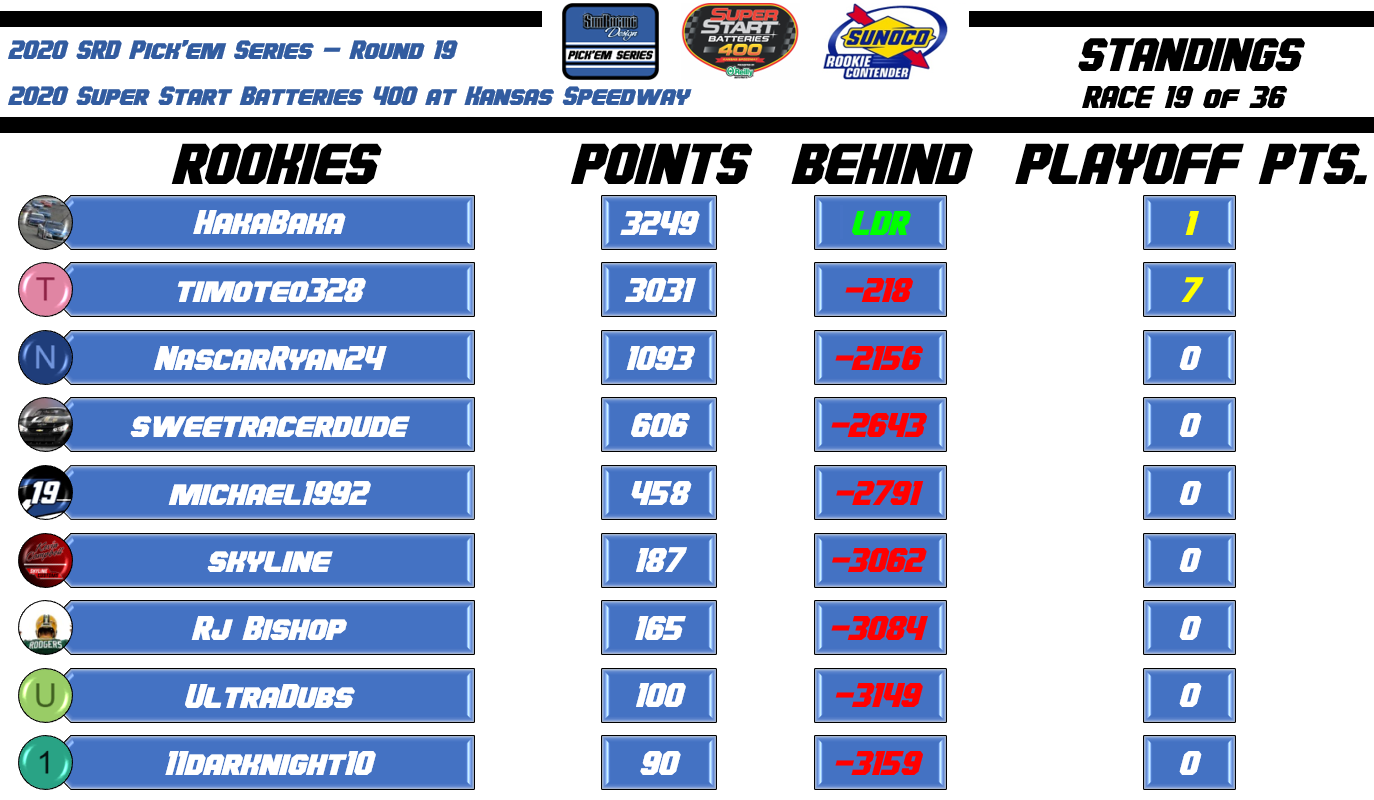 This week, NASCAR and the SRD Pick'em Series head up north to the New Hampshire Motor Speedway for Cup Series action from the 1-mile oval! The race weekend discussion and Pick'em threads for NHMS will be up shortly, so don't forget to check those out and make your picks!!!

Thank you all for playing! See y'all in "New Hampsha!"

timoteo328 said:
Sorry I missed the weeks events- just got engaged and we're planning our wedding
Click to expand...