My Name Is Human

Another Win for me, Another race after, I forget to submit my picks.

Thirty-two members of the Sim Racing Design community submitted picks for the one-off event at New Hampshire Motor Speedway this past Sunday. Scoring was very good (if you didn't pick Kyle Busch, that is ), with 15 of our members scoring over 200 points, and all members scoring well over 100 points! We also have a tie this week - this time, for the win! But before we get too far ahead of ourselves, let's take a look at our "Final Five" who will compete for the win (in A-Z order):

As previously stated, some very nice picks were submitted across the board this week! But, as always, only one set of picks can come out on top... wait... that's not gonna work this time... We actually have three sets of picks that "came out on top" following Sunday's race at "The Magic Mile!" However, we still can only have one winner. So, to explain how our winner was determined this week, let's turn it over to SRD Pick'em Series Commissioner, @MattSRD28:


MattSRD28 said:
So into the tiebreakers we go... There were no companion races this weekend so that's out. Next, we go to the sum total of places away picked drivers were from their finishing position. That eliminated (one of our top-finishing members) since his picks were a combined 10 places away, while (our other two top-finishing members') picks were 8 places away... The very seldom used 3rd tiebreaker is average finish of picks. Fortunately, (our two remaining top-finishing members) did not pick the same 5 drivers in the same 5 places, allowing the tie to be broken. (Our winner's) picks average finish was 3.4 and (our "runner-up's") was 4.2.
Click to expand...

So with that great explanation out of the way, we are now ready to hand over the "lobstah!" Without further delay, please join me in congratulating @Johnnyk1990 on taking home the win in New Hampshire! Johnny picks up his second win of the season with a score of 238 points! @Saan Anguish and @Sebastian Ruiz just miss out on the win due to some crazy tie-breaking scenarios, as they also scored 238 points each! @BrendonH12 brings it home in fourth place with a score of 230 points, and @Gwen Cole places fifth with his score of 221 points! 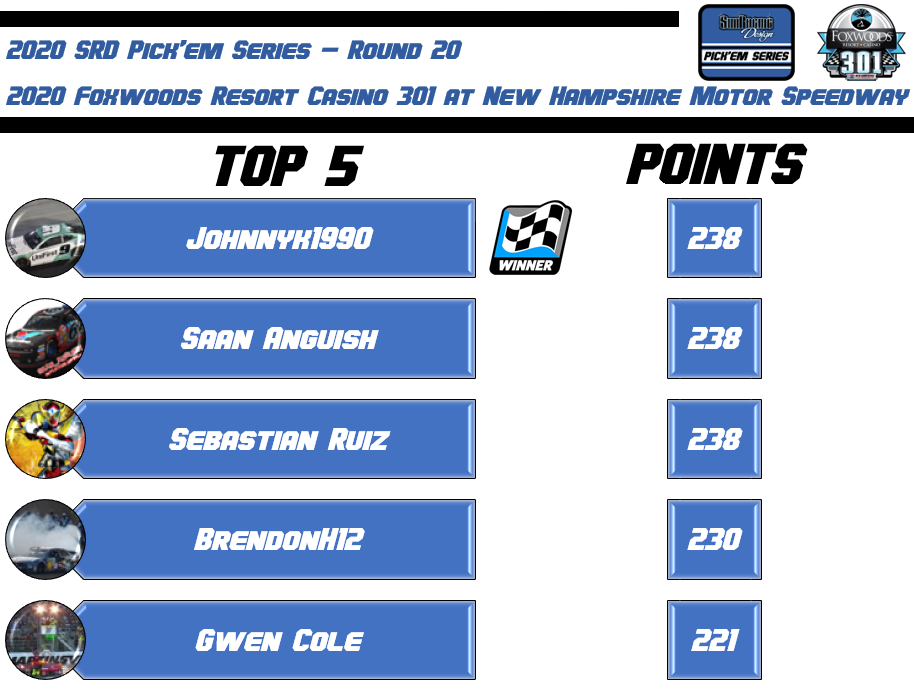 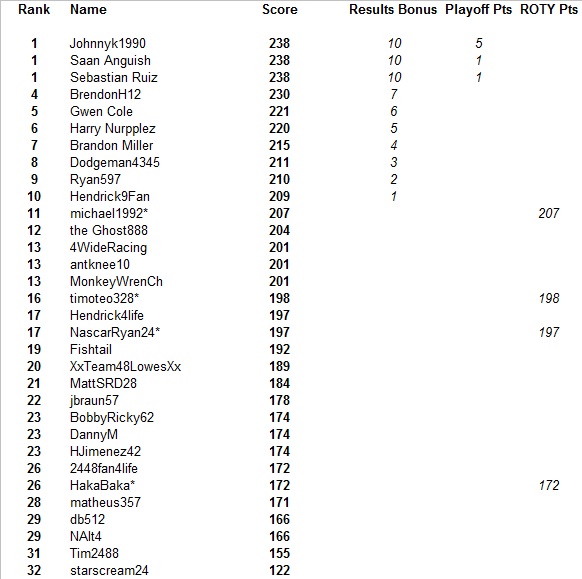 As mentioned above, @Johnnyk1990 picked up his second win of the season joining @Keselowski2Wallace, @BrendonH12, and @Ryan597 as the only two-time winners of the 2020 SRD Pick'em Series Season! They, along with @Brandon Miller, SRD Pick'em Series Rookie @timoteo328, @MonkeyWrenCh, @MattSRD28, @db512, @Gwen Cole, @jbraun57, @4WideRacing, @Hendrick9Fan, @2448fan4life, @NAlt4, and @Hendrick4life are the only members who have managed to find victory lane this season. These 16 members also currently make up our 2020 Playoff field, and even though all of the Playoff spots have seemingly already been laid claim to, YOU still have time to grab a win and steal a Playoff spot from another member! However, time is slowly running out on our regular season, with just six races remaining before the Playoffs start. So, just continue submitting your very best picks, and who knows? You might just pick up a win and claim yourself a Playoff spot as well! 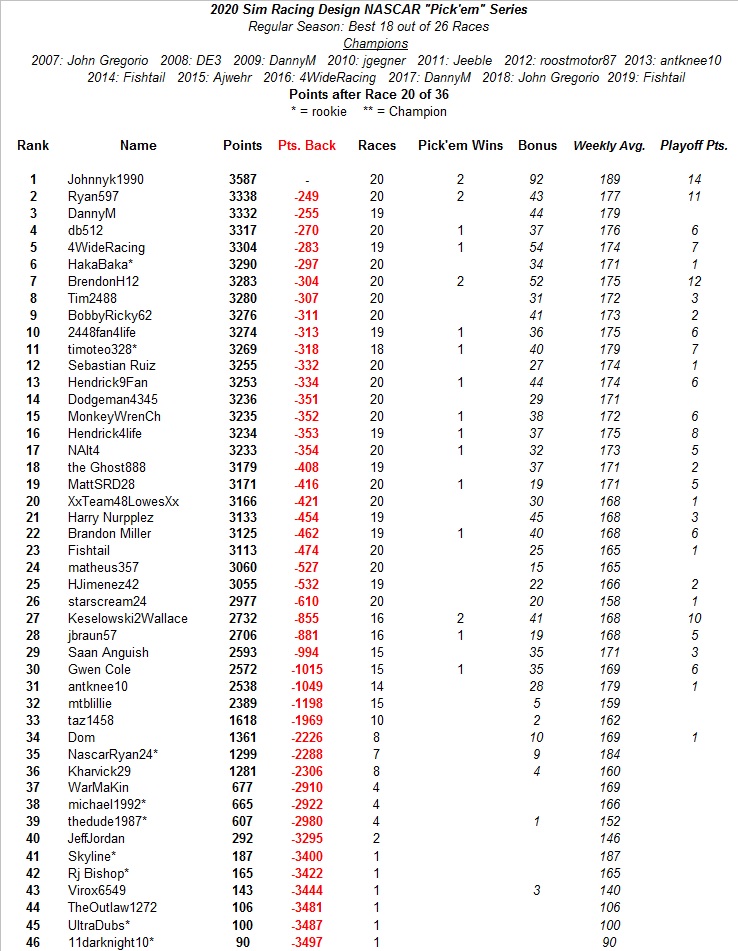 And an updated lowest scores list following our latest outing at New Hampshire...

And finally, let's take a look at our 2020 Sunoco Rookie of the Year Battle! @HakaBaka holds on to his lead over @timoteo328 on the rookie front; however, the gap got just a bit smaller due to @timoteo328 having a better finish than our top dog. @michael1992 takes home the title of top-finishing rookie at New Hampshire just outside the top 10 in 11th place. @michael1992 also managed to leapfrog @sweetracerdude in the rookie standings, leaving all four of our active rookies in the top four spots! 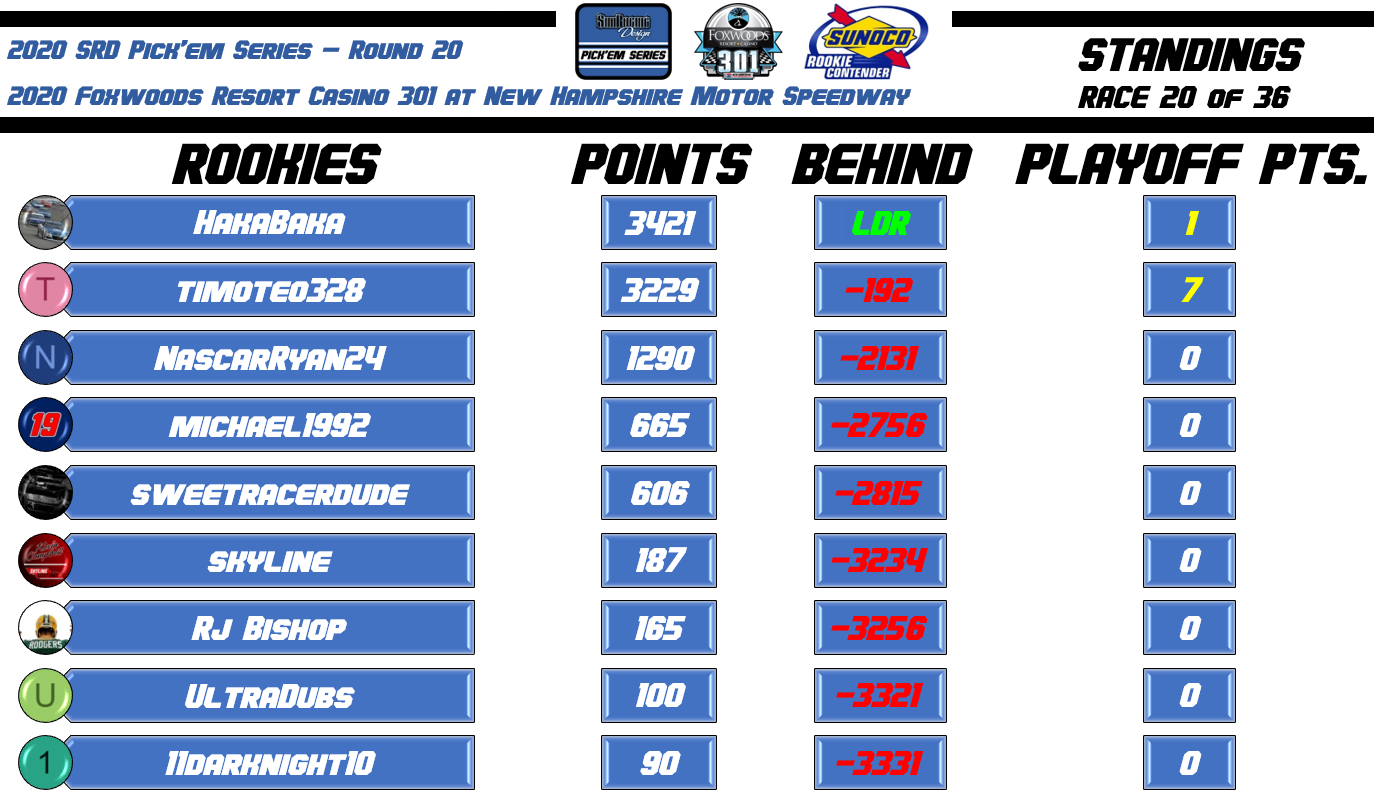 This week, NASCAR and the SRD Pick'em Series head to the two-mile D-shaped oval of Michigan International Speedway and the twists and turns of Road America for action from all three top series! The race weekend discussion and Pick'em threads for Michigan and Road America will be up shortly, so don't forget to check those out and make your picks!!!

Thank you all for playing! See y'all in "Wischigan" (or "Michiconsin")!