[NXS] 2020 Virginia is for Racing Lovers 250 at Richmond Winner:Ross Chastain

Twenty-eight members of the Sim Racing Design community submitted picks for the events at Richmond Raceway this past weekend. Scoring was much better this week! Of the 28 members who took part in Round 28 (coincidentally), all but four scored over 200 points --- and all members scored well over 100 points! There was also another tie in our top 5 - this time, for the fourth position - as well as several more sprinkled throughout the field. All that being said, let's now take a look at our "Final Five" who battled it out for the win in Richmond (in A-Z order):

As you may have noticed, ALL of these members listed above are Playoff contenders! But only one of these members and one set of awesome picks was good enough to take home the trophy! So, who got it done in Richmond? Well, without further delay, please join me in congratulating @Johnnyk1990 on a job well done in VA! He picks up the win and locks himself into the Round of 12 with his winning score of 245 points! Second place goes to @MonkeyWrenCh and his score of 239 points! Our rookie sensation, @HakaBaka, continues to impress with another top 5 finish in third by virtue of his score of 230 points! And fourth place is split between @NAlt4 and our only other Playoff contender who knows for certain that he will see the Round of 12, @Ryan597! Both of these contenders scored 228 points each! 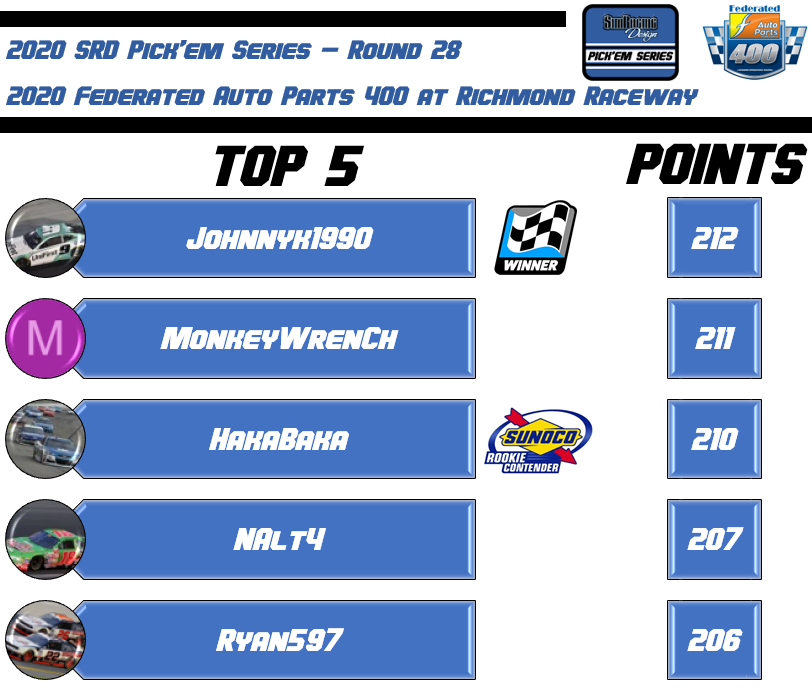 2020 Federated Auto Parts 400 at Richmond Raceway Full Results, brought to you by @MattSRD28: 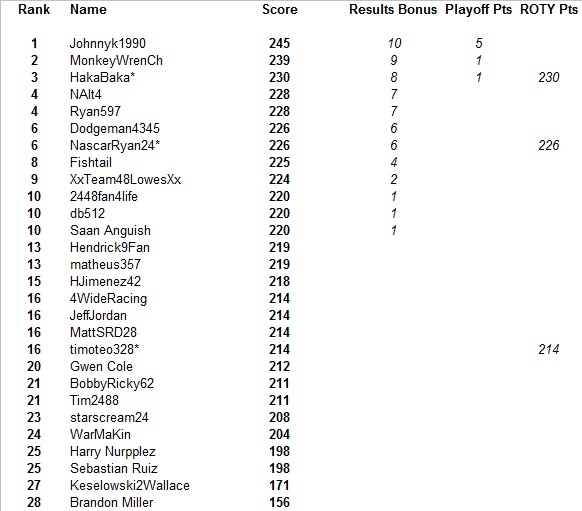 Leaving Richmond, we now know for sure two names that will be moving onto the Round of 12 by virtue of a victory: @Ryan597 and @Johnnyk1990. That means that 10 other spots remain for the next round of the Playoffs! Some contenders are looking a lot better than others at this point, but we will forbear on giving any predictions or premature congratulations. This is still the SRD Pick'em Series, and anything can happen in these events!

Last week, @MonkeyWrenCh was barely hanging onto the final transfer spot. But he greatly stepped up his game this week and is now solidly in a position to advance to the Round of 12! But as stated, nothing is set in stone and anything can happen! As well, following the events at Darlington, @Hendrick9Fan sat below the cut line. He now has a 25-point gap between him and @MattSRD28 and a 38-point lead over @Keselowski2Wallace. So, those positions are very much still up for grabs. However, our other two Playoff contenders below the cut line - @Hendrick4life and @BrendonH12 - missed out on the events this past weekend at Richmond and are now in a must-win situation! If one of them doesn't come away with a win this weekend, they can kiss their Championship dreams goodbye! 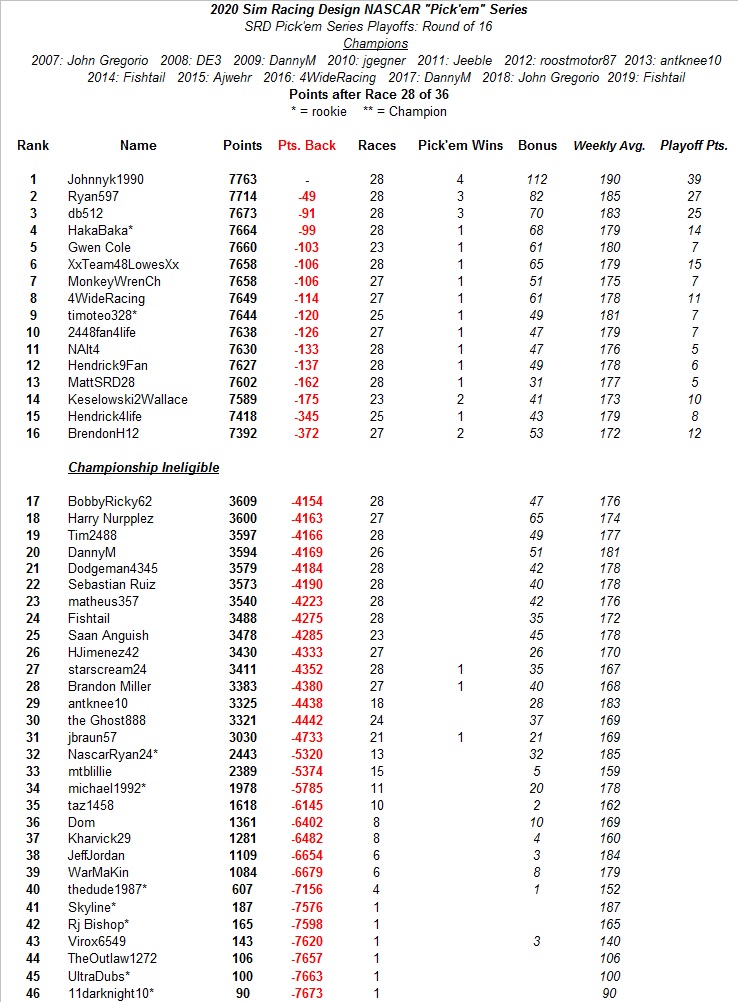 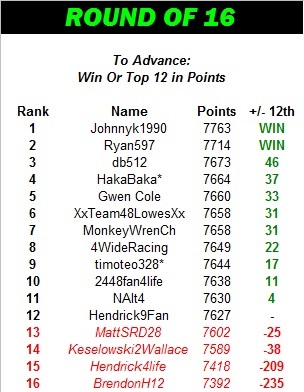 And an updated lowest scores list for our non-Playoff-making members following the events at Richmond... 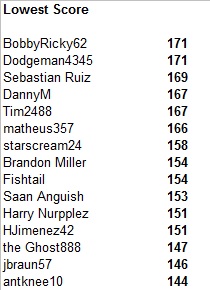 And finally, let's take a look at our 2020 Sunoco Rookie of the Year Battle! As stated earlier, @HakaBaka continues to dominate on the rookie front and in general as he picked up yet another top 5 at Richmond and is looking to advance to the Round of 12 in the 2020 SRD Pick'em Series Playoffs! He also further extends his lead over rookie rival @timoteo328 and the gap now sits at 481 points. 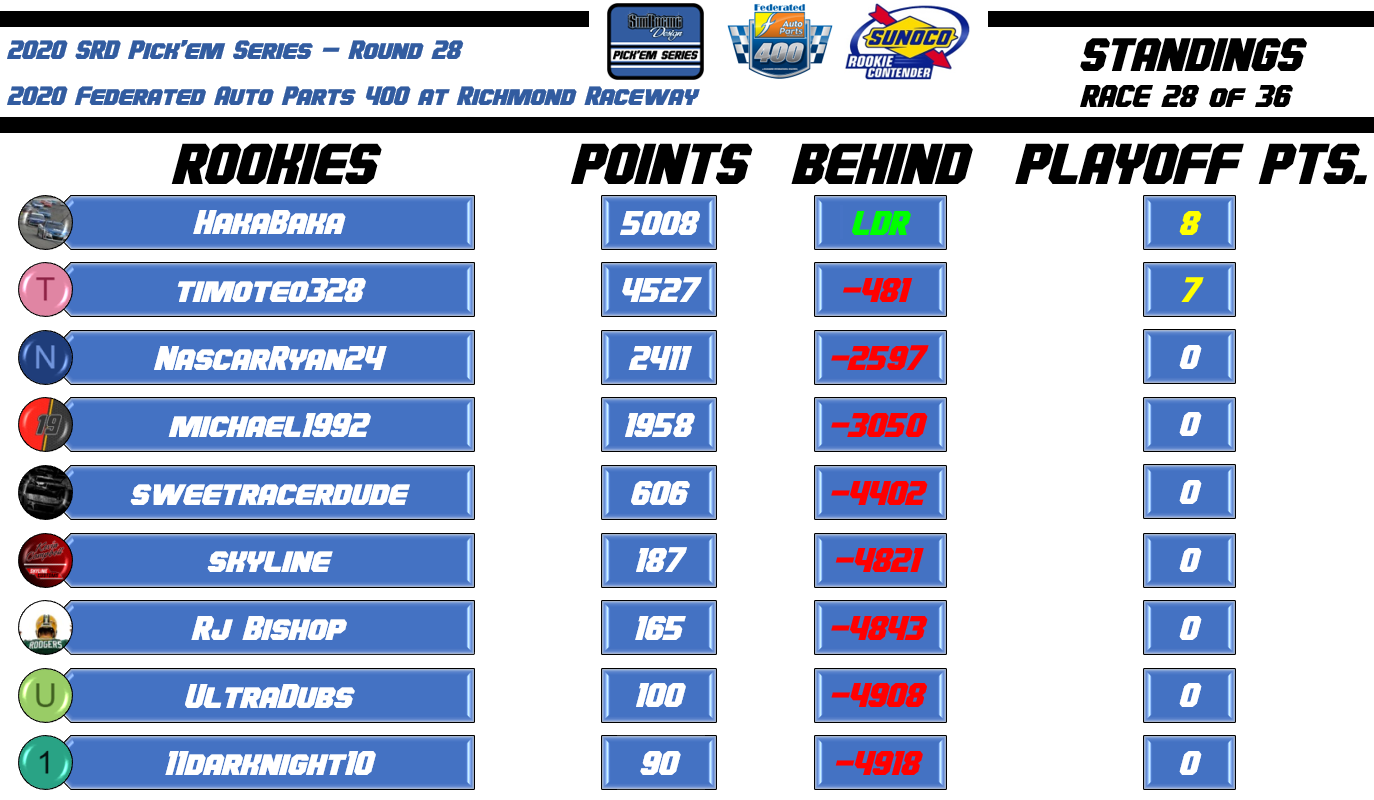 And that does it for our race recap of Round #28 of the 2020 SRD Pick'em Series! We hope y'all had fun at Richmond and are ready to continue to compete for wins, and for our Playoff contenders, a chance to advance further in the Playoffs, and ultimately, take home that Championship trophy!

This week, NASCAR and the SRD Pick'em Series heads to Bristol for action from all three top series! The Bristol thread will be up shortly, so don't forget to submit your picks like I did last week! lol

Thanks for playing and see y'all in Bristol!