James Buescher is racing at Dega?!?

I blame recently watching this lol.

Noooooooooo!!!!! I was so preoccupied with things this morning I never got on to make my picks!!! I had to look I haven't missed picking a race since Phoenix race 35 in 2012! What terrible timing too!!! Arrgggghh

Oh well at least I’m locked into the Round of 8!

Twenty-nine members of the Sim Racing Design community submitted picks for the events at Talladega Superspeedway this past weekend. As is normally the case at such an unpredictable track as Talladega, scoring was not that great... Of our 29 participating members, only 18 managed to score over 100 points and nobody was able to reach the 200-point mark this week, with the highest and winning score being quite a few points below that mark. And this week, we did not see any ties within our top 5. Now, let's take a look at our "Final Five" who battled it out for the win on the high banks (in A-Z order):

It's an all-playoff contender "Final Five" this week! That means we're gonna know our second member locked in to the Round of 8 very shortly - that is, if last week's winner, @2448fan4life, didn't throw a block on the other four! So who was able to survive the carnage, crazy, and chaos that is Talladega and come out on top? Well, without further delay, please join me in congratulating @Gwen Cole on taking home the checkered flag and locking herself into the Round of 8! She does so with a score of 172 points! Points leader, @Johnnyk1990, comes home second with his score of 160 points! Third place goes to SRD Sunoco Rookie contender, @timoteo328, by virtue of his score of 158 points! @MonkeyWrenCh places fourth with his score of 146 points and our other Round of 8 shoo-in, @2448fan4life, takes home our final top 5 spot with his score of 142 points! 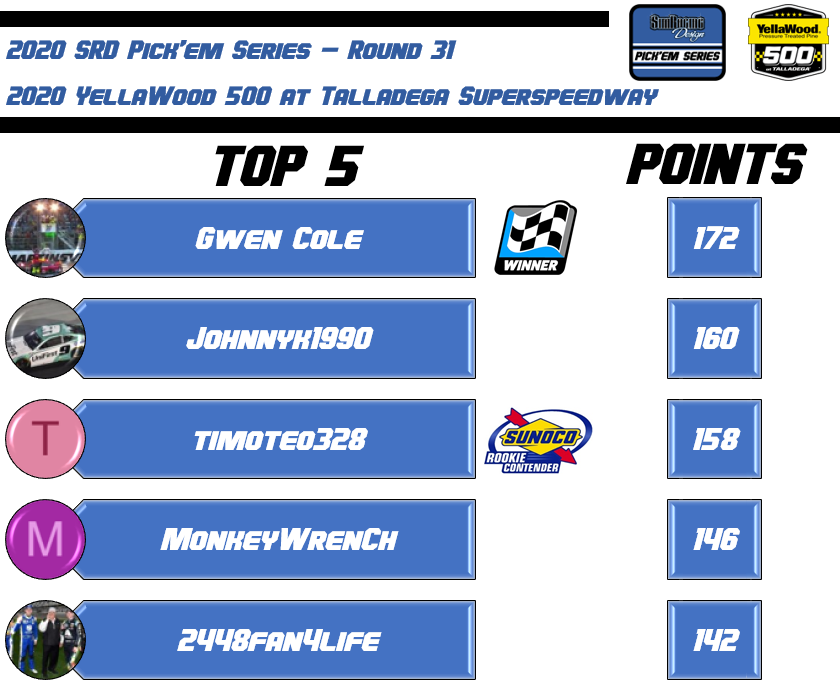 2020 YellaWood 500 at Talladega Superspeedway Full Results, brought to you by @MattSRD28: 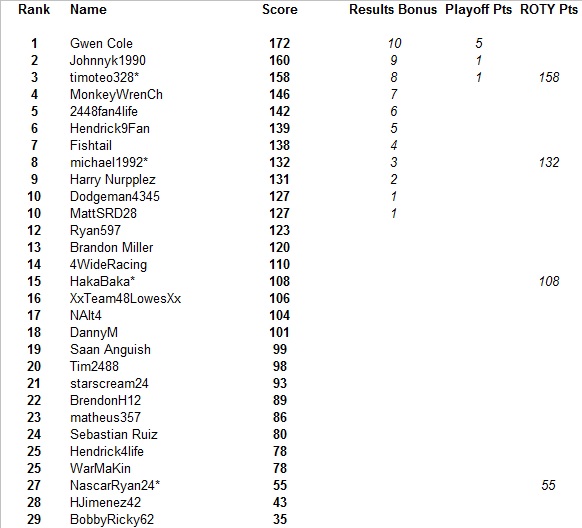 Ahhhhh, Talladega... The big track was kind to about half of our Playoff contenders, while not being so kind to the other half. So as we leave one wild card track and head to another in the Charlotte Roval, here's what we know: @2448fan4life and @Gwen Cole are locked in to the next round via big wins in the Round of 12. As well, our points leader, @Johnnyk1990, pretty much just has to fill out an entry form - even if it's filled out with his favorite Disney characters - and he would also be moving on to the Round of 8. We also made a little bit of history this past weekend, with our top 5 finishers in the race leaving as the top 5 in points! And finally, the bad news - one of our Playoff contenders, @db512, failed to submit picks for the events at Talladega and dropped from 2nd place all the way down to 12th!

So with that being said, heading into Charlotte, there are still five spots to be decided as it regards the Round of 8. Everybody is still in play and nobody is in a must-win situation - though @db512 is quite close due to missing an event. Quite a few unknowns remain, but one thing is certain: the Roval is going to be very exciting and nerve-racking this week! 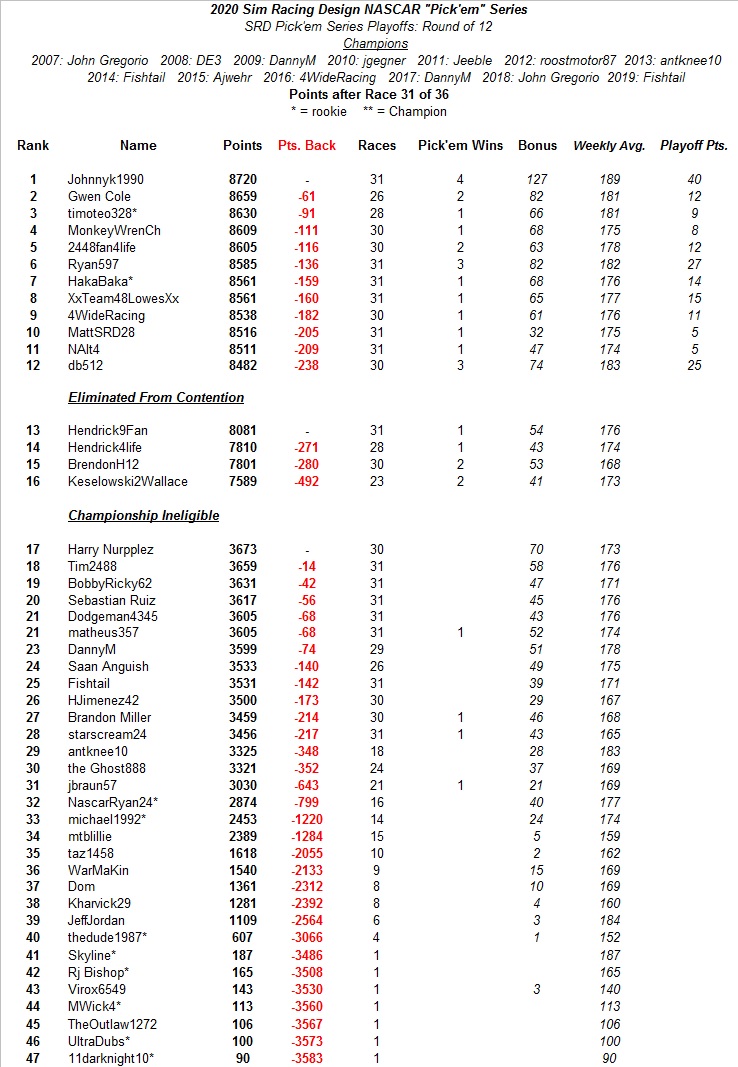 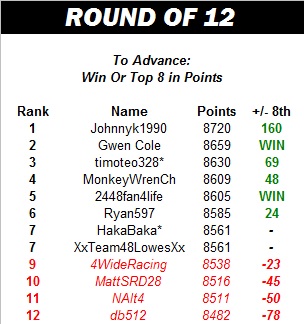 And an updated lowest scores list for our non-Playoff-making members following the events at Talladega... 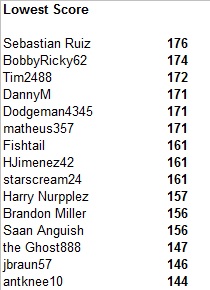 And finally, let's take a look at our 2020 Sunoco Rookie of the Year Battle! Playoff contender, @timoteo328, had another great top 5 run at Talladega and was able to close the gap between himself and fellow Playoff-making rookie, @HakaBaka, yet again. But as we mentioned last week, with so few races remaining in this 2020 season, as long as @HakaBaka continues to show up for each event, he will most likely win out on our rookie battle! 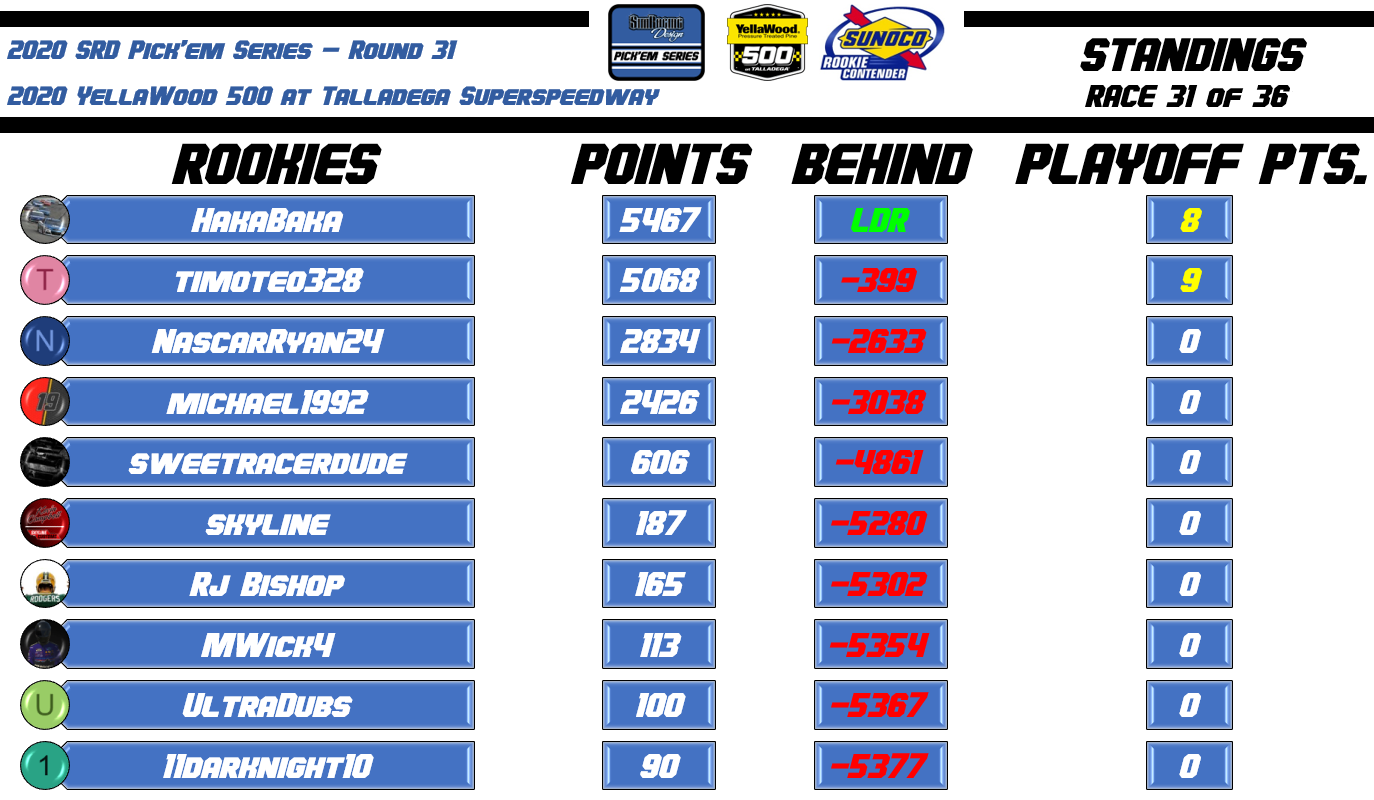 And that does it for our race recap of Round #31 of the 2020 SRD Pick'em Series season and race #2 of the Round of 12! We hope y'all had fun on the high banks of Talladega Superspeedway and are ready to continue to compete for wins, and for our Playoff contenders, a chance to advance further in the Playoffs, and ultimately, take home that Championship trophy!

This week, NASCAR and the SRD Pick'em Series heads to the Charlotte Roval, where - once again - anything can happen, for Cup and XFINITY Series action! The Roval thread will be up shortly, so don't forget to submit your very best picks, and maybe find yourself heading right on into the Round of 8!

Thanks for playing and see y'all in Charlotte!

i did soooo bad but im looking foward to the Roval!

Wow I was hoping I'd win but I never actually expected it to happen lmao.

Gwen Cole said:
Wow I was hoping I'd win but I never actually expected it to happen lmao.
Click to expand...