Twenty-nine members of the Sim Racing Design community submitted picks for the events at Texas Motor Speedway this past weekend over the last couple of days. Scoring was pretty decent, with all members scoring well over 100 points! However, only our winner was able to break the 200-point barrier. We also have a tie once again in our top 5 - this time for the fifth position! So before we get into the specifics of the results, let's meet our "Sensational Six" who competed for the wet and wild win at Texas (in A-Z order):

Just one participating member of this year's SRD Playoffs - @Ryan597 - managed to make the cut for our "Sensational Six" this week. That means there's a very high chance that we will see an upset winner this week - just like good ol' Kryle Busch yesterday... So, who was able to pull off the long-awaited win in the Lone Star State? Well, without further delay, please join me in congratulating Playoff spoiler, @Hendrick9Fan, on taking home the checkers! He crashes the party with his score of 201 points! Second place belongs to @Ryan597, who just missed out on punching his ticket into the next and final Championship Round at Phoenix with his score of 195 points. Third place goes to SRD Pick'em Series Sunoco ROTY contender, @NascarRyan24, who finished with a score of 184 points! Finishing fourth is @Brandon Miller, who was able to net 178 points at Texas! And finishing in a tie for fifth place are @HJimenez42 and @Tim2488, who scored 176 points each! 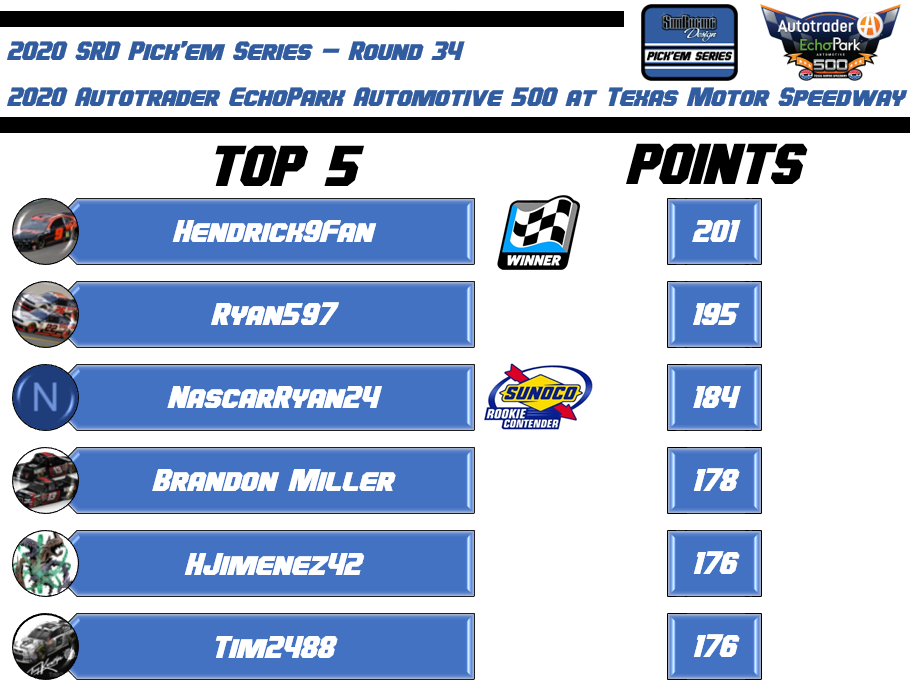 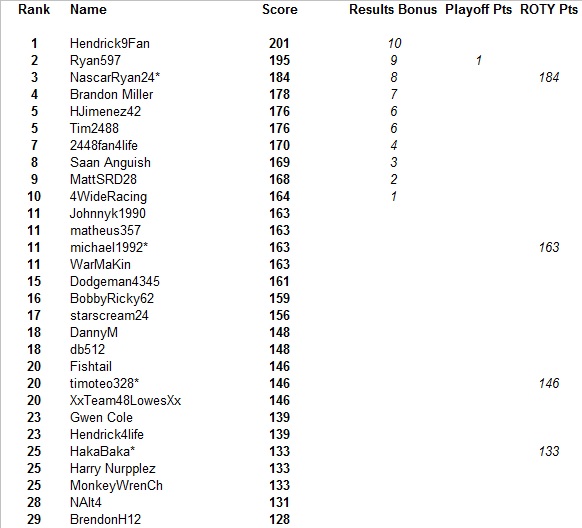 So, (finally) leaving Texas, we know for a fact that one member is heading to Phoenix with a shot at the Championship. That member, of course, is @2448fan4life, who won last week at Kansas. But as we mentioned last week, @Johnnyk1990 is a virtual lock to make it into the final Championship Round of 4, and after very strong runs in the first two races of this Round of 8, @Ryan597 is also on track to make a run for 'chip! So, with virtually three spots on lock, that means there is virtually one spot up for grabs this week at Martinsville! It's pretty tight amongst our other five remaining Playoff contenders, so this battle is seemingly going to come down to the wire!

So with that being said, please join me in wishing the best of luck to @Gwen Cole, @timoteo328, @HakaBaka, @MonkeyWrenCh, and @NAlt4 this week! 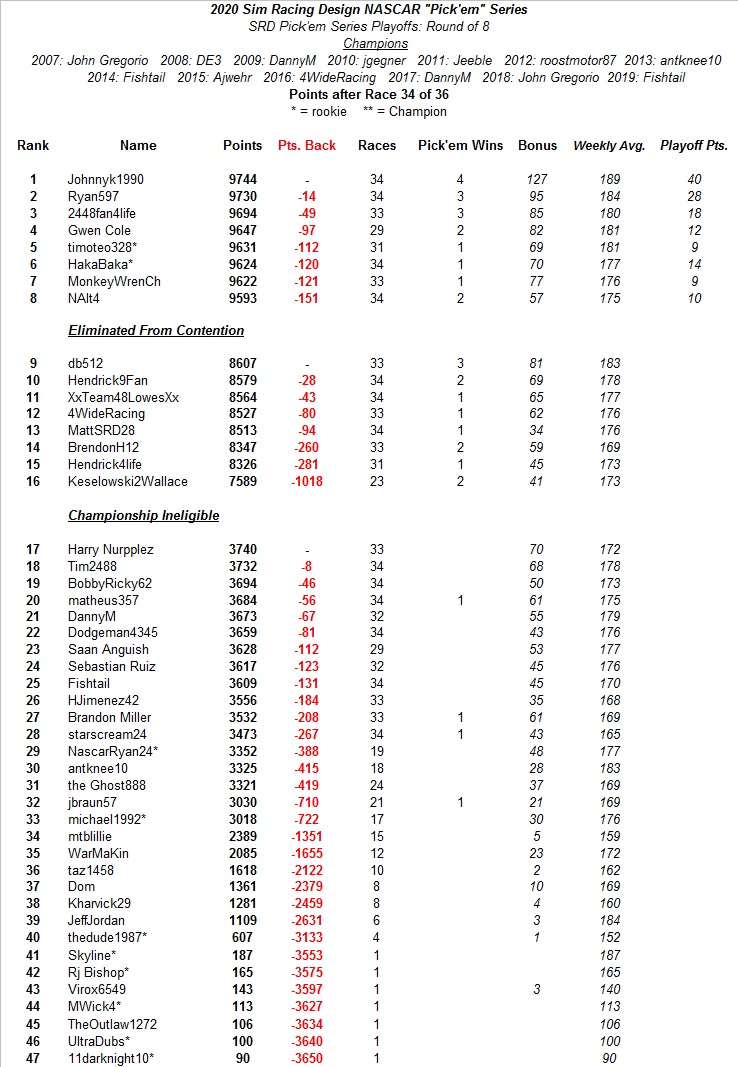 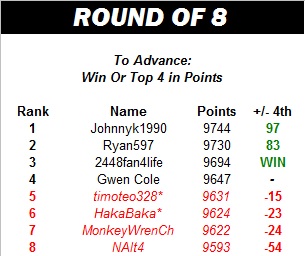 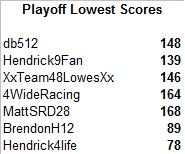 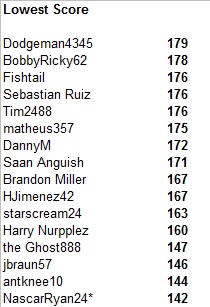 And finally, let's take a look at our 2020 Sunoco Rookie of the Year Battle! Texas was another rough one for our rookie contenders... This week, @NascarRyan24 takes home the title of top-finishing rookie via his awesome third place finish! Congrats, Ryan! As well, @HakaBaka continues to own the competition and is probably rehearsing his acceptance speech right now for his ROTY award he will be receiving once the dust settles in Phoenix in a couple of weeks! 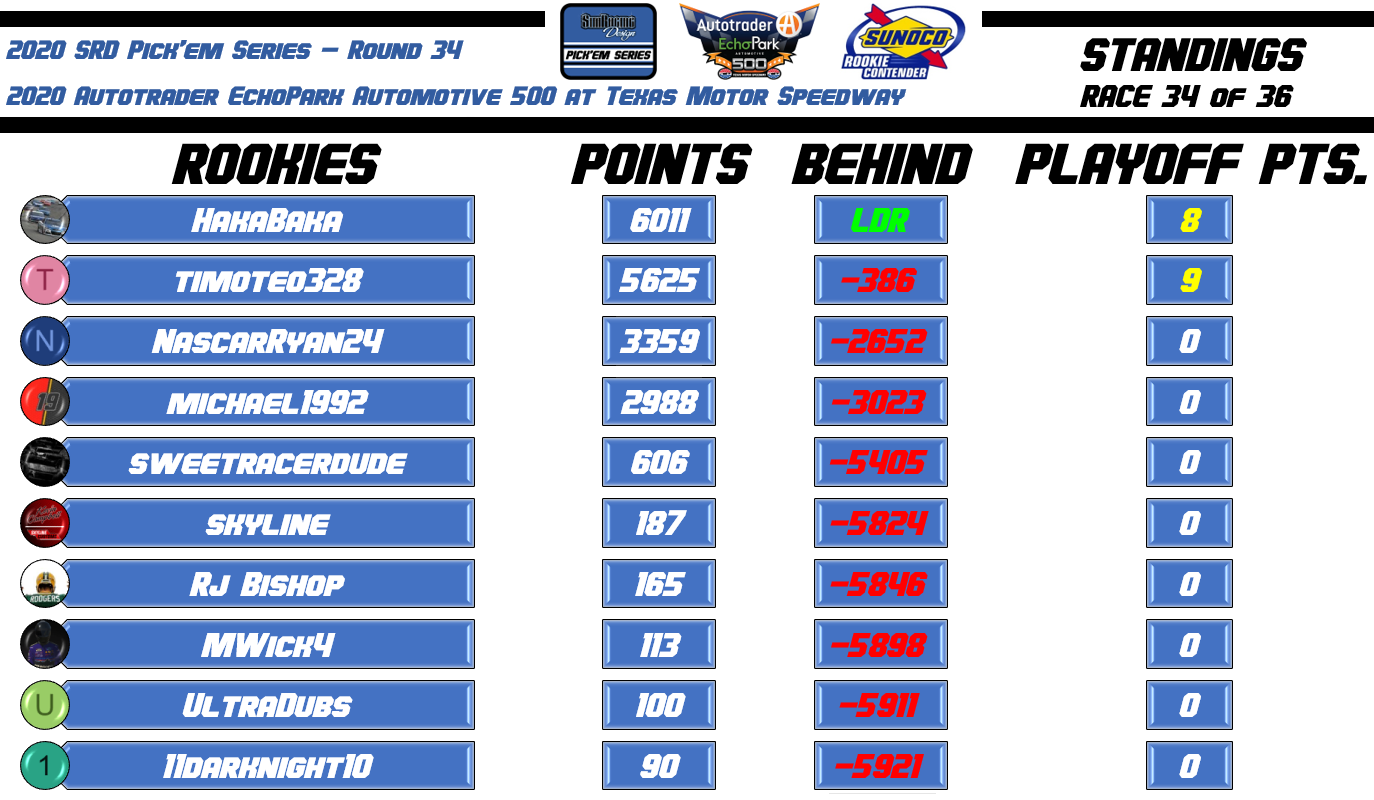 And that does it for our race recap of Round #34 of the 2020 SRD Pick'em Series season and race #2 of the Round of 8! We hope y'all had fun splashing in the puddles at Texas and are ready to continue to compete for wins, and for our Playoff contenders, a chance to advance further in the Playoffs, and ultimately, take home that Championship trophy!

This week, NASCAR and the SRD Pick'em Series heads to Martinsville for Cup, Truck, and XFINITY Series action from the .5 mile oval! The Martinsville thread will be up shortly, so don't forget to submit your very best picks, and maybe find yourself heading into the Championship Round of 4!

Thanks for playing and see y'all in VA!