This week is going to probably be the highest scoring week in SRD History im guessing. Also @NAlt4 had all the top 5 drivers but in a incorrect order!

NascarRyan24 said:
This week is going to probably be the highest scoring week in SRD History im guessing. Also @NAlt4 had all the top 5 drivers but in a incorrect order!
Click to expand...

And I think @Johnnyk1990 won the SRD Pick ‘Em Championship and I think I finished 2nd.

Now now we gotta wait til points are count lol

Thirty members of the Sim Racing Design community submitted picks for the events at Phoenix Raceway this past weekend. Scoring was pretty good - and very close - with all members scoring well over 150 points! But none were quite able to reach that 200 point mark. As well, we had not one, but two ties this week in our top 5 - one was for second place and the other was a four-way - yes, FOUR-WAY - tie for fifth! In fact, there were a whole lot of ties throughout the field -- including a six-way tie for 16th! So with that, let's get on into it and introduce our uh... well, "Elite Eight" who fought it out for the final win of the season (in A-Z order):

A 36-event season and it all comes down to this one race! Hmmmm.... It appears that only one of our Championship 4 Playoff contenders managed to make our "Elite Eight" this week. But a little more on that in a bit. Let's hand out the Phoenix trophy first! So, without further delay, please join me in congratulating SRD Pick'em Series Sunoco Rookie, @NascarRyan24, on finding the diamond in the desert! He takes home the win with a score of 192 points! Second place is split between @db512 and Playoff contender, @Johnnyk1990, who each finished with scores of 191 points! Fourth place goes to @WarMaKin and his score of 190 points! And the big tie in our "Elite Eight" is split amongst @Fishtail, SRD Pick'em Series Sunoco Rookie of the Year, @HakaBaka, @Hendrick4life, and @MonkeyWrenCh - who all managed to score 189 points! 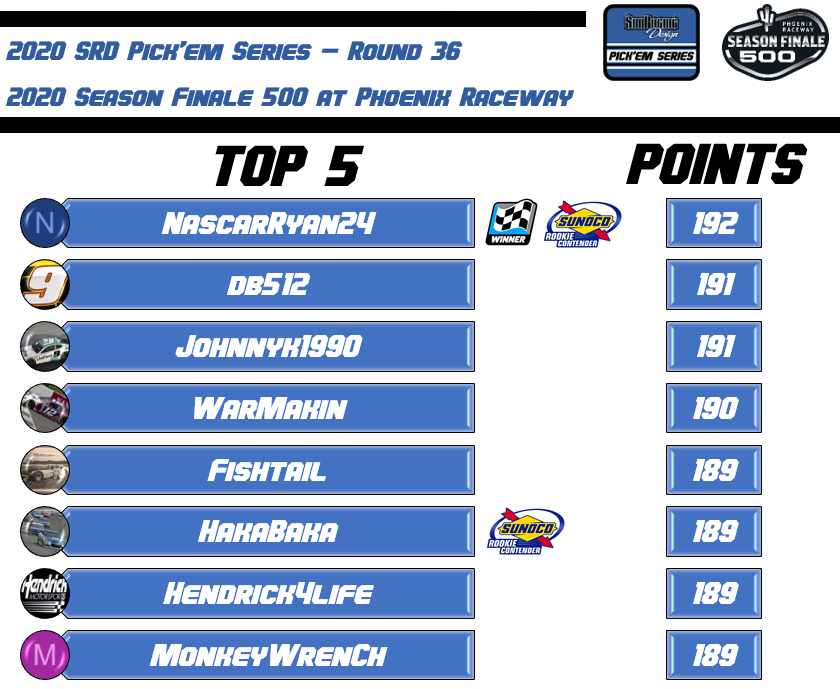 2020 Season Finale 500 at Phoenix Raceway Full Results, brought to you by @MattSRD28: 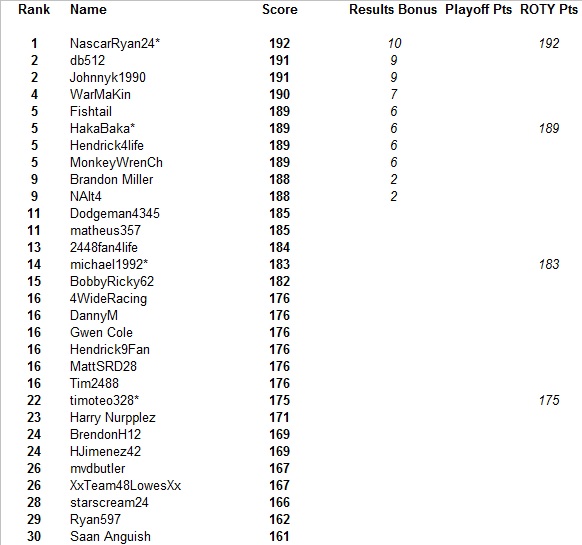 As we mentioned above, only one of our Championship 4 contenders managed to make our "Elite Eight" this week. That member was the very same one that has been dominating the SRD Pick'em Series almost since the drop of the green flag at Daytona way back in February! So with that being said, please join me in congratulating our 2020 SRD Pick'em Series CHAMPION - @Johnnyk1990! This is Johnny's first championship, but if he keeps picking like this, it surely won't be his last!

We want to congratulate our other three championship contenders - @2448fan4life, @Gwen Cole, and @Ryan597 on their excellent seasons as well! Y'all put up a good fight, and hey! - there's always next year! 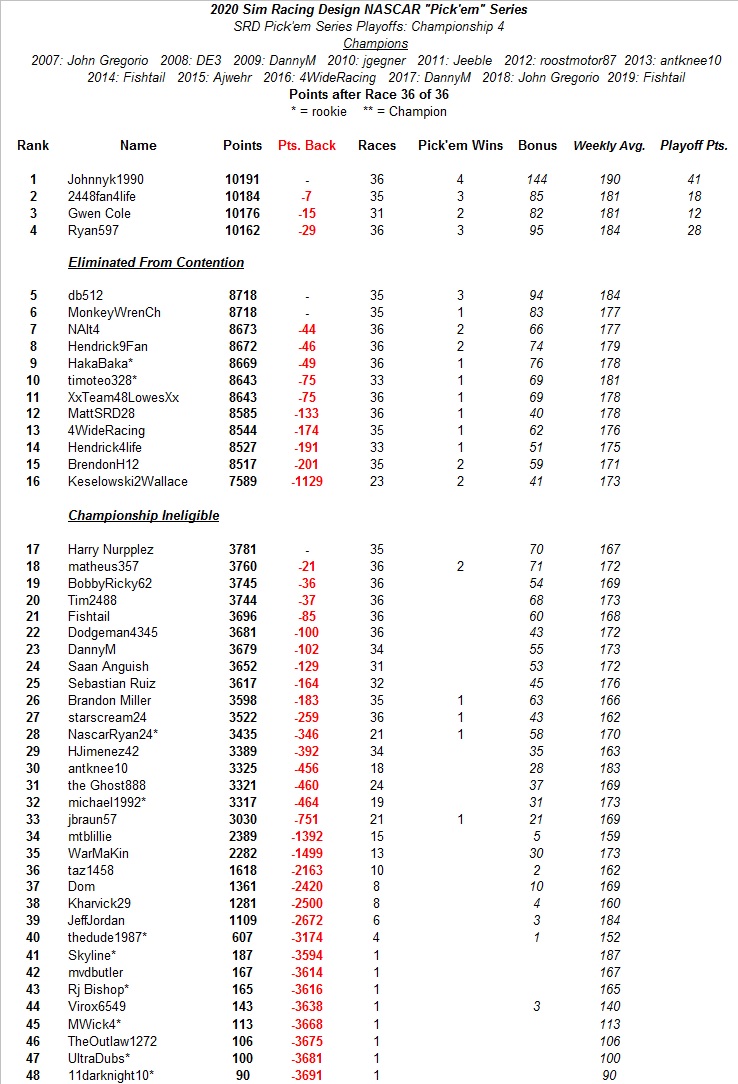 On the rookie front, @NascarRyan24 continues to impress, as he was able to pick up the final win of 2020 at Phoenix! 2020 saw many a rookie submit picks for various events, but we want to especially thank @HakaBaka, @timoteo328, @NascarRyan24, and @michael1992 for sticking around longer than any of the others and, for the most part, completing the 2020 SRD Pick'em Series season with us! Thank you, guys! And congrats on great debut seasons!

And even though it's been official for a while, let's hear it one more time for our 2020 SRD Pick'em Series Sunoco Rookie of the Year, @HakaBaka! Congrats, man! Here's your graphic: 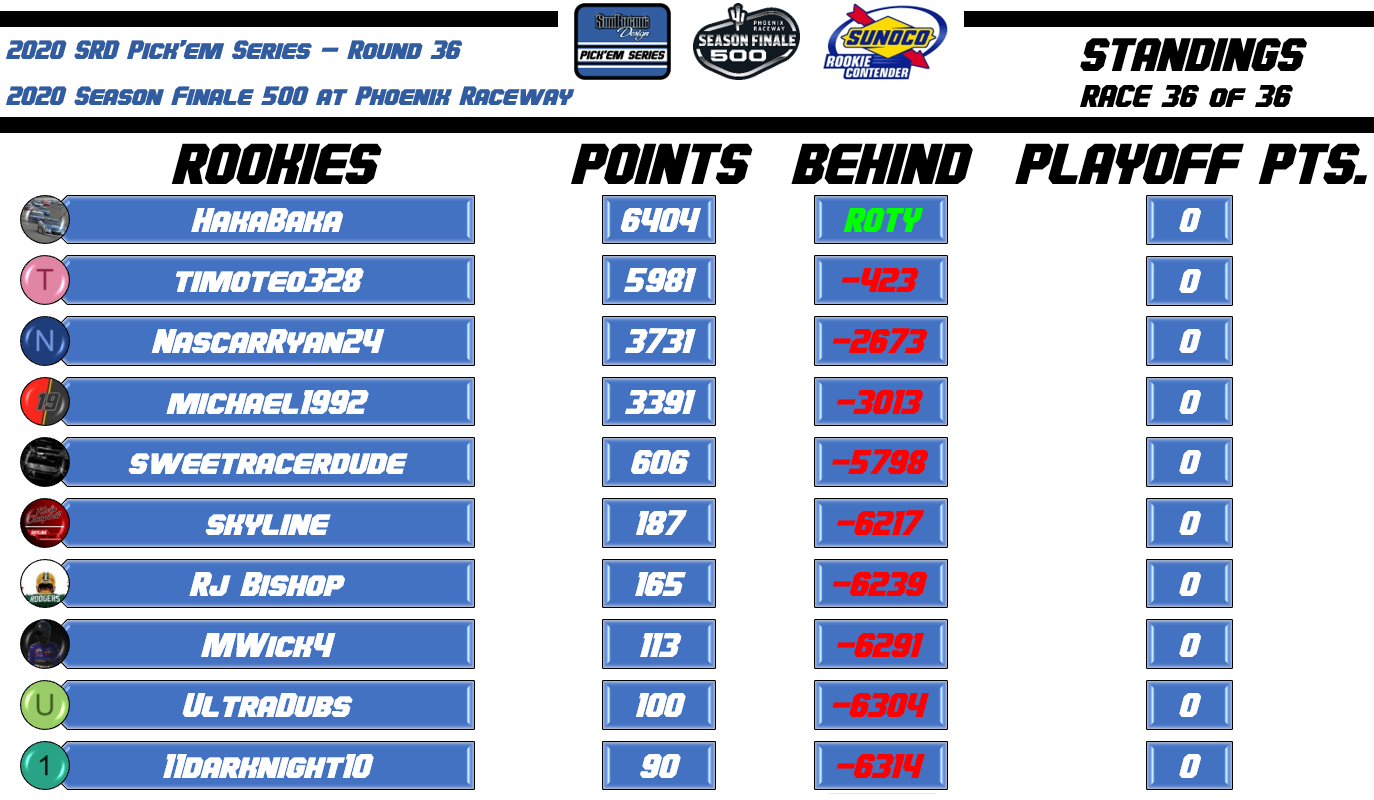 And with that, the 2020 SRD Pick'em Series season has officially come to a close. 2020 - what a year, right? lol That's enough said on that... I'm sure most of y'all are more than willing and ready to put this year in your rear view mirrors, but before you do, allow me to - on behalf of @MattSRD28 and myself - say a great big THANK YOU to all of y'all who make this series what it is and give us reasons to keep putting this fun thing on for y'all! I also want to personally thank @MattSRD28 for allowing me to have a part in this series and recap these races for you guys - it's definitely one of the highlights of my weeks! I don't know about y'all, but I'm already looking forward to the 2021 SRD Pick'em Series season! We can't wait to see y'all again in February for Daytona Speedweeks presented by AdventHealth! Thank you all again for playing along this year and congrats again to our two big winners in 2020 - @Johnnyk1990 and @HakaBaka!

See y'all next year!

Known in some circles as 19Caleb93

Congrats @Johnnyk1990 ! and @HakaBaka on the ROTY award!

See Y'all in Daytona!