Mallon strikes first, puts pressure on the other championship five after taking the pole for the finale at Homestead.

"Starting P9, not as high as we wanted, but we feel really good about our car in race trim. Just gonna stay out of trouble and get to the front, and control the pace of the race."

“What a start to this weekend for this OPP group, we got our 10 Patagonia Camry P3, and John just a few spots back in eighth. With this being his final race on the stock car side it would be so great for John to be able to win his second championship before calling it a career. Gotta go down to the 43 group and see if we can get Joshua’s car tuned in a little better to his liking. As for our 10 team I really feel like we’ve come close to scoring our first career win together, especially at Darlington a few weeks ago. This will be our final race with Toyota so nothing would feel better than to leave them with a win and a championship.”

"Mid pack not what we wanted. We should have a good car for the race just have to be sure to avoid trouble early."

"21st might be a lucky starting position, who knows?"

Well, I apex'ed the center of the corner wrong on 3 and 4 on the final lap, and it showed in out time. I've put us behind the 8=ball a lot this season with my qualifying, but we'll be there for race day. I love Homestead, I just hope is shows some love back for me. If we can we'll try and get Matt and Joshua up there with us running there all day long.

"Tyler has a tenth and a half on us so far, but I know this #42 team will get me to where I need to be in order to win this trophy. #1 seed and a fast car - I can just picture standing up there with that cheque."

"Holy crap we're gonna clinch the team title. We completely missed the setup in qualifying trim but have a good feeling we can get this Hoonigan camaro up to the front and close out this season on a high note."

Race coming up in about an hour.

canadienhits said:
Well, I apex'ed the center of the corner wrong on 3 and 4 on the final lap, and it showed in out time. I've put us behind the 8=ball a lot this season with my qualifying, but we'll be there for race day. I love Homestead, I just hope is shows some love back for me. If we can we'll try and get Matt and Joshua up there with us running there all day long.
Click to expand...

Look in front of you

@darreningram - "Ready to fight with my guys and get the #SRDCup title."

Engines have fired here in Miami as we prepare for the final race of the season. 5 drivers looking to take home a championship tonight.

Mallon and Llamas lead us to the green flag! We are underway! 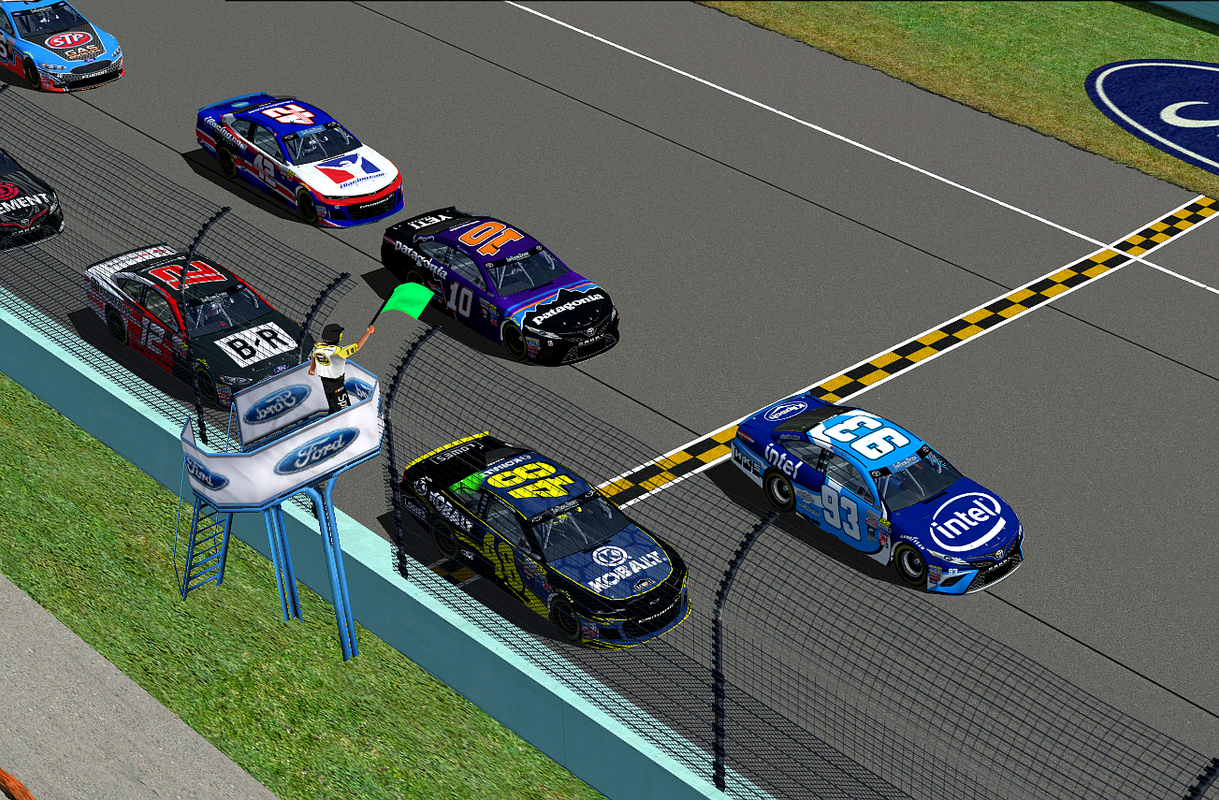 Lap 1: Mallon breaks away on the start and clears himself into turn 1. Wichelman and Llamas battle for 2nd as the field fans out 2 and 3 wide all the way back.

Lap 2: Llamas works the outside line in turns 1 and 2 and clears Wichelman for 2nd. Harris working over Coleman for 4th with a 3 wide battle between championship contenders just behind. Ingram stuffs it to the inside into turn 3 looking to make up positions early. Merzlak forced to the middle with Hooper railing the outside. They remain 3 wide off of 4 and down the frontstretch.

Lap 4: Anywhere on this track is fast right now as we look mid pack and see cars from top to bottom. 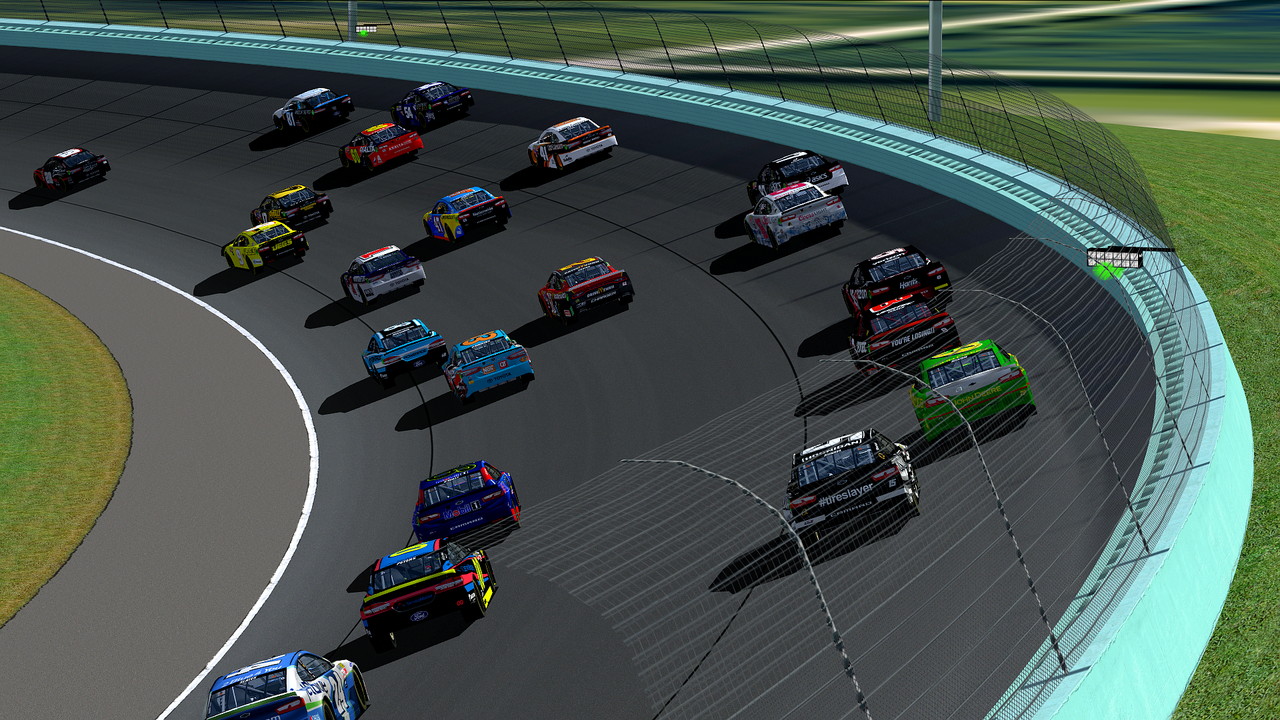 Lap 5: Merzlak has worked around Coleman and Wichelman to move up to 3rd. The two rookie title contenders so far leading the way as Mallon continues to lead by 1 car length over the defending Miami winner Cody Llamas. Hooper is up to 5th with Harris down to 8th and Ingram in 9th.

Lap 9: Front runners finally starting to spread out and get single file. Mallon still leads by about 1 car length over Llamas. Merzlak still P3 with Hooper just behind in P4. Wichelman, Coleman, and Webster run 5th through 7th. Harris and Ingram still stuck in 8th and 9th early but still a lot of race left to run. Caudill rounds out the top 10.

Lap 12: Merzlak goes for a move for 2nd into turn 1 and Hooper echoes that with a move to make it 3 wide for 2nd. Llamas way to the top nearly scrubbing the wall in turns 1 and 2. 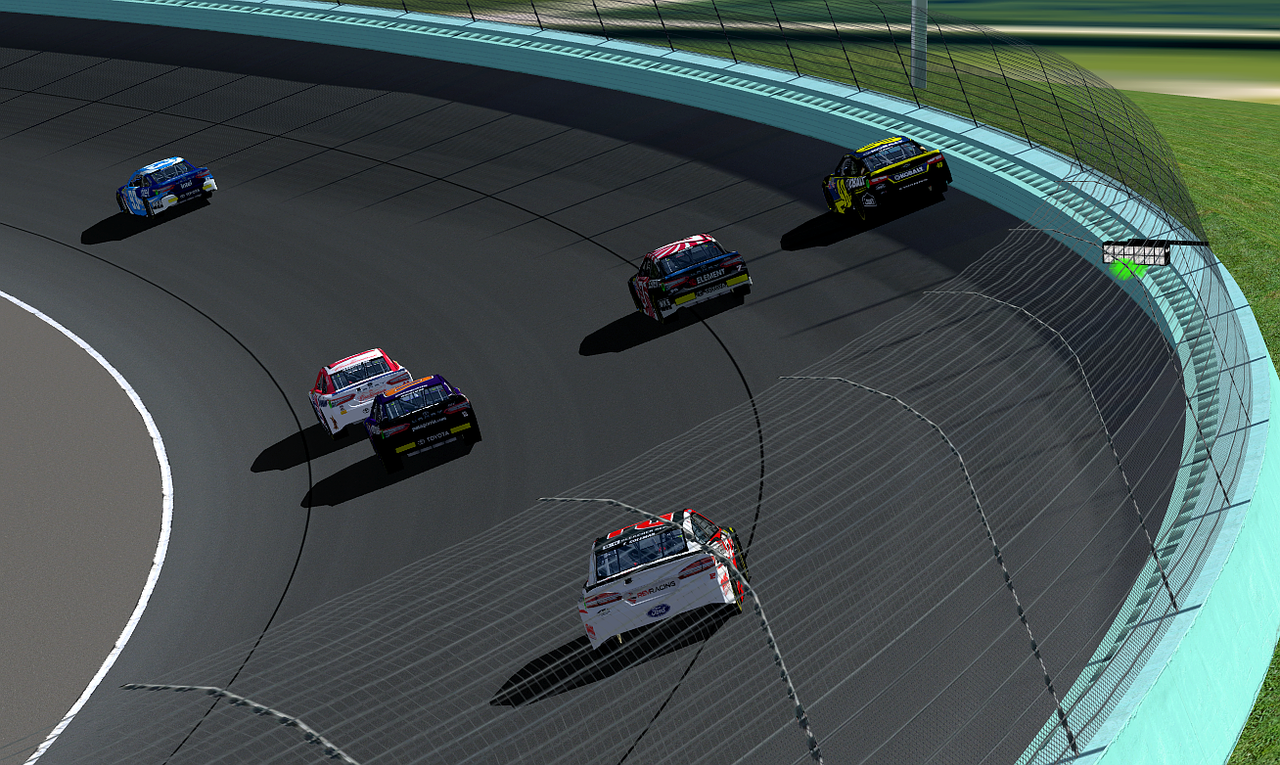 TROUBLE FOR MERZLAK! Off turn 2 Merzlak pushed on exit and just clipped Llamas in the left rear. Merzlak gets crossed up and runs off track and hits the inside wall. Merzlak keeps it straight and tries to rejoin on the track into turn 3 but carries too much speed and slides up the banking and collects DJ Harris. Ingram uses up every ounce of luck he has as the seas part and he splits both cars and makes it through clean. We stay green as Merzlak and Harris get back up to speed but both drivers have damage, Merzlak with heavy damage to both sides of his Camry. 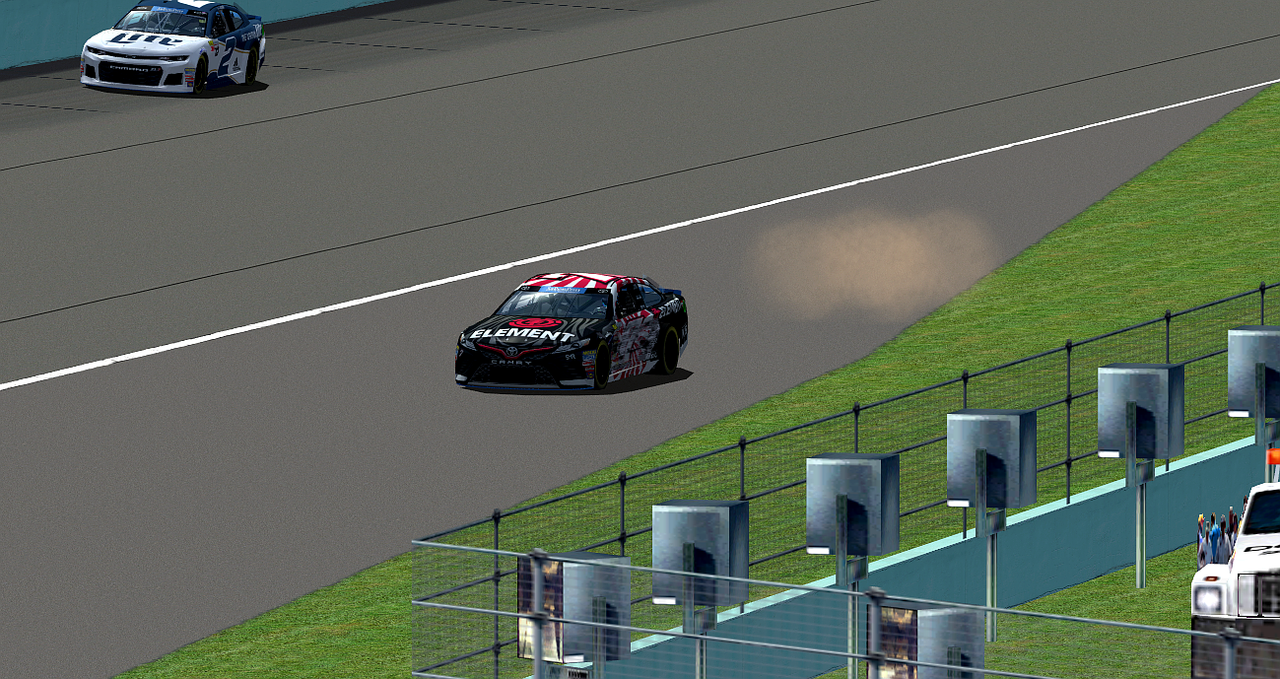 We take a look at the onboard from Ingram during that incident. That could've easily ended all 3 drivers chances early in this race.

"Woahhhh, saw that in my mirror. They didn't hit John, did they?"