JJ Jordan looking to run Eldora Truck race
While being interviewed after qualifying in the SRD Cup Series Daytona race JJ Jordan indicated that he wanted to try dirt racing. "I'm sure I'll be bad at it," he said, "but it would be a cool thing to try and hey, maybe I can even get a win there." While Jordan does not have a ride lined up currently, he suggested that he could pull the sponsorship together for one race and is seeking a ride for it.

JeffJordan said:
JJ Jordan looking to run Eldora Truck race
While being interviewed after qualifying in the SRD Cup Series Daytona race JJ Jordan indicated that he wanted to try dirt racing. "I'm sure I'll be bad at it," he said, "but it would be a cool thing to try and hey, maybe I can even get a win there." While Jordan does not have a ride lined up currently, he suggested that he could pull the sponsorship together for one race and is seeking a ride for it.
Click to expand...

Lintz Motorsports has an open seat available..... and has sponsorship available to run it...

thedude1987 said:
Lintz Motorsports has an open seat available..... and has sponsorship available to run it...
Click to expand...

Thank you for offering - but I already have a plan with a team, and the truck is being painted at the moment.

JJ Jordan to run Eldora with MF Motorsports, Crown Lift Trucks will sponsor
At a D.C.-area National Forklift Safety Day convention, JJ Jordan announced his plans for Eldora. He expressed interest recently and it didn't take long for him to find a ride with MF Motorsports. Jordan will pilot the #37 Crown Lift Trucks Ford F-150 as a companion to the MF #73. Crown Equipment Corporation is headquartered in nearby New Bremen, OH about half an hour from the race track. Jordan previously failed to advance past his heat in the SRD NNS Series at Eldora in 2017, but this time he's going to be disappointed with anything less than a win in the feature. "I know the point is to have fun, but I want to run every lap and compete and be a threat...and I know I'm gonna need some practice first." Jordan made a quick stop at Barber Motorsports Park in Birmingham, AL to show off the car and run a few test laps. 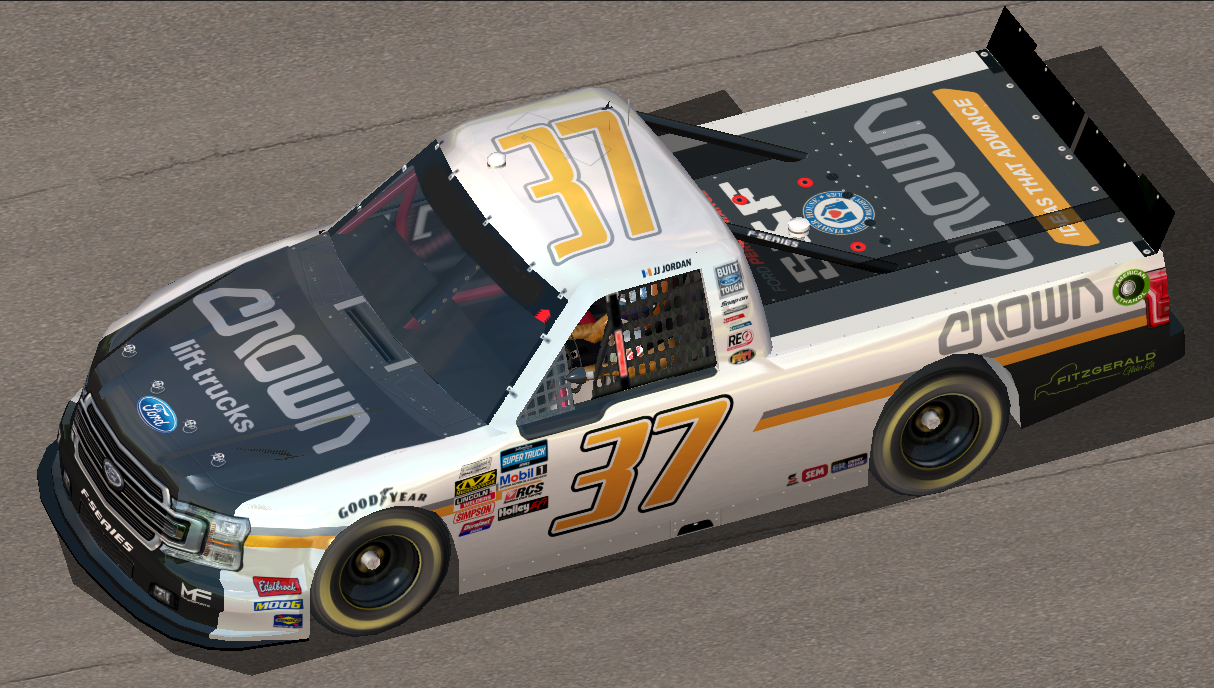 Jordan closed out his speech by thanking Matheus Fiorentini and all of MF's sponsors for being very supportive in getting this ride together. While he hasn't ruled out running other races, he indicated that he is focused on Eldora first and running his regular Cup schedule.

Jordan has been a Toyota driver for most of his career, but he doesn't mind driving a Ford.

Nah, I don’t want to write a press release. Would love to run Canadian Tire and Montreal in a truck if possible

Nah, I don’t want to write a press release. Would love to run Canadian Tire and Montreal in a truck if possible
Click to expand...

Lintz Motorsports has an open seat

Huge thanks to @Tetronix for his awesome work on this truck!

Lintz Motorsports Announces Third Truck Program
South Bend, IN -- Today officials at Lintz Motorsports announced that the pieces are available for a 3rd part time truck program within our organization. This truck is available to any driver eligible to run in the series. So far 2 races into its Rookie season, Lintz Motorsports has amassed 1 race win, 1 Top 5, 3 Top 10s, and 1 Stage win as well as showing Top 5 and Top 10 speed in both events of 2019.

Any interested parties should contact @thedude1987 . With the right situation, we'd be willing to expand into 3 Full Time trucks as we have partial sponsorship for the program.

Wayne and Speed Demon Racing return to the SRD Truck Series, will run the remainder of the 2019 season
After a two-year hiatus, Ryan Wayne and his Speed Demon Racing team will make their return to the SRD Truck Series. Ryan will run the remaining 14 races left on the 2019 schedule with sponsorship coming from Quizlet and Zeiss. Quizlet will sponsor 10 races, while Zeiss will cover the remaining races. Speed Demon Racing will stay with Toyota and Ryan will continue the pilot the #39 truck. "I look forward to returning to the SRD Truck Series" said Wayne. "After the loss of sponsorship from GoPro and Gillette, it was best for our team to regroup and recharge. Fortunately, Quizlet and Zeiss came on-board and we are ready to race some tough competition. Once this season is completed, our plan is to compete for the championship in 2020."

Pictures of the #39 Quizlet Toyota are shown below. An announcement of the Zeiss truck will be shown at a later date. Had a much busier weekend than I expected, gonna push Myrtle Beach to next Saturday when I know I’ll be free. As it stands it does appear the Playoff Amendment will pass and be added to the rule book.

I would like to be a part of this league. It would be my first time in a community offline league of any kind, so if I am doing something wrong please let me know and I will do what I gotta do. As I understand the rules, I have to be picked up by an existing team (or at least, a team owner that has completed a full season, so if anyone wants to pick up a green rookie...), so I am announcing my candidacy I guess as a rookie. I realize its a little late in the season so I do not mind waiting until next season. Also, I will take whatever I can as a rookie so if that means a one-off deal or a part time deal, that is totally fine. I am also happy to paint the truck myself or at least help out with it if that is any incentive, and I do not mind making changes to whatever I paint at the Owner's request.
Thank you for your consideration!

Sounds good to me

Alright guys, I was planning on running Belle Isle this weekend with practice and Q today and race on Saturday but we've run into an issue. When I set the schedule I was expecting a field size of 29 (what we had last year), possibly even less. That would be perfect because Belle Isle can only sustain a field of 29. Our issue is our entry list has grown up to 33 for this week, the most the series has ever seen, so Belle Isle is now going to have to be replaced. I tested the Charlotte ROVAL Beta but unfortunately the ai can't handle it in it's current form without wrecking every lap.

So, here's my plan moving forward: we take an off week this week, I find a suitable track, and we run it on Saturday night the 20th. I leave for vacation for a week on Saturday the 27th so my plan is to run Texas World probably around noon on that Friday the 26th. Vacation won't stop me from running Montreal. I'm bringing my laptop with me so I will have practice and qualifying posted on that Friday August 2nd. I'm coming home on the 3rd and will run the race on the 4th. Three races in a row, after that I'll probably take a week off before Eldora.

UPDATE: Read some posts on NR Track Designs page and made some changes to how I have the race set up, the Roval might be a viable option. I'm going to take the week and do more testing and maybe try one or two more tracks out.

Would love to try the ROVAL!
E

If anyone has any open spots I’m looking for somewhere to go after IndyCar.